Shiv Sena warned BJP that a fire will erupt if the saffron party tried to undermine the majority enjoyed by the MVA government. 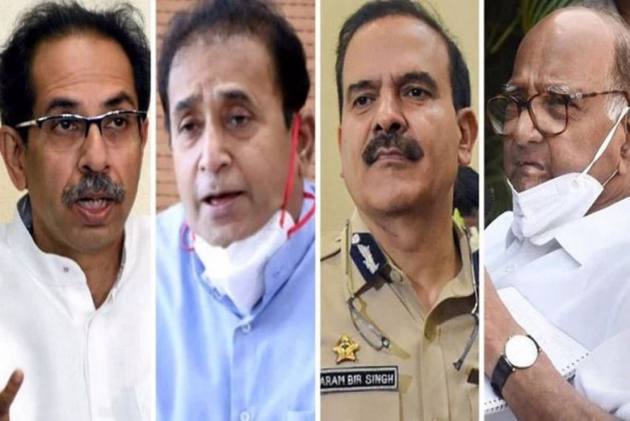 Shiv Sena on Monday said the Maha Vikas Aghadi (MVA) government in Maharashtra enjoys a "good majority" and it will not fall because of "one official". The party, however, admitted that former Mumbai Police commissioner Param Bir Singh's allegations of corruption against state Home Minister Anil Deshmukh have maligned the image of the latter's department.

In the editorial in the Sena mouthpiece 'Saamana', the primary ally in the state government said that a fire will erupt if the Bhartiya Janata Party tries to undermine the majority enjoyed by the MVA government.

The MVA comprises the Sena, NCP, and Congress.

The party also said this issue has now become a "matter of prestige" for the party-led government, a day after Sharad Pawar-led Nationalist Congress Party (NCP) ruled out the resignation of Deshmukh.

A major political storm erupted in Maharashtra after Singh wrote a letter to Chief Minister Uddhav Thackeray last week claiming that Deshmukh had asked police officers to collect Rs 100 crore monthly, including Rs 50-60 crore from bars and hotels in Mumbai.

Singh was recently shunted out as Mumbai police commissioner in the midst of a probe by the National Investigation Agency (NIA) in the recovery of an explosives-laden SUV from outside the south Mumbai residence of industrialist Mukesh Ambani last month.

Deshmukh had said that Singh was transferred in view of "serious and unforgivable mistakes" committed by some colleagues of the top cop. The home minister had also denied the allegations of corruption raised against him.

The hue and cry being generated by the BJP over Singh's letter seems to be part of a conspiracy, the Sena said, adding the letter came close on heels of Opposition leader Devendra Fadnavis meeting Prime Minister Narendra Modi and Union Home Minister Amit Shah in Delhi last week.

"It seems to be the goal of the BJP to impose President's rule in Maharashtra by contending that law and order situation is not right. For this, new pawns are being created. It is clear, Singh is being used in that manner," it said.

Singh, whose suspension the BJP was seeking over the bomb scare outside Ambani's residence, has now become a "darling" of the opposition party which is now targeting the government by keeping the gun on his shoulder, the edit said.

The Sena, however, admitted that Singh's allegations against Deshmukh have "definitely maligned" the image of the state home department and that they have given a tool to the Opposition to target the government.

"It (the overall issue) has now become a matter of the government's prestige," the Sena said.

".....The MVA enjoys a good majority even today. Fire will erupt if (you) try to undermine that majority. This is not a warning, but a fact. The Opposition should not forget that governments are not formed and don't fall because of one official," it added.

The Sena further said that Singh making allegations against Deshmukh in the letter and "leaking" the same to the media was not in line with discipline.

Mumbai Police carried out a proper probe into the death of Bollywood actor Sushant Singh Rajput under Singh's leadership, the Sena said and praised him for handling the
Kangana Ranaut episode well.

The Sena alleged that the BJP was using Singh to defame the state government.

"Reacting to Singh's letter, Deshmukh on Saturday said that Singh was raising such accusations to save his skin in police officer Sachin Waze (arrested by the NIA in connection
with the bomb scare case).

"If this (Deshmukh's comment) is true, then the BJP is using Singh to defame the Maharashtra government," the Sena said.

The party alleged that it was the BJP's policy to not only defame the government, but to cause trouble in its functioning.

"The Opposition party has been making the extreme use of Central probe agencies in Maharashtra. It seems the Centre may send CBI or NIA in the state even if four hens and two crows die due to electric shock somewhere," the edit said.