Maharashtra Rains: 2 Missing In Landslide, Villages Cut Off Due To Floods

Prime Minister Narendra Modi spoke to Maharashtra Chief Minister Uddhav Thackeray about the situation and assured him of all possible support from the Centre. 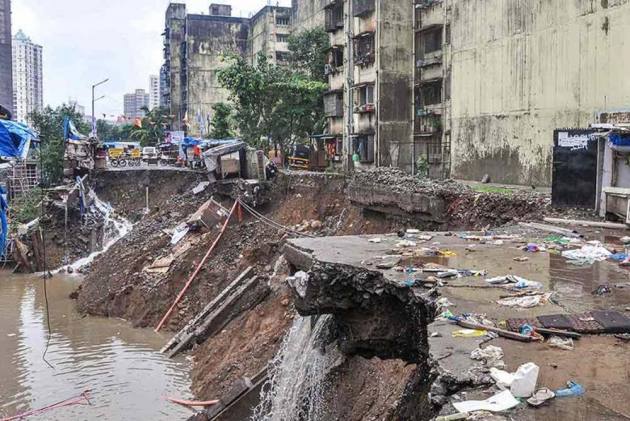 “We had to halt the rescue operations due to incessant rains and the possibility of further landslide at the same site. The operation will commence tomorrow morning,” he said.

In a separate incident, a landslide took place at Talai village in the coastal Raigad district of Maharashtra as the Konkan region was pounded by rains. As per the district collector Nidhi Chaudhary, while local police have rescued two persons so far, reaching the village from outside is very difficult due to the floods. The roads leading to the village are either under water or blocked by landslides on the route, she added.

The village is located in Mahad tehsil of the district, but as the Savitri river is flowing at its danger level, the road connection with the village has been cut off. "There is also another landslide on the road, hence no rescue team of police or NDRF could reach there,” the collector told a news channel.

Even the local police stations are inundated or submerged, the collector added.

On Thursday, teams of the Army and Navy started the rescue operations in the flood-hit Raigad and Ratnagiri districts. Prime Minister Narendra Modi spoke to Maharashtra Chief Minister Uddhav Thackeray about the situation and assured him of all possible support from the Centre.

“Spoke to Maharashtra CM Shri Uddhav Thackeray and discussed the situation in parts of Maharashtra in the wake of heavy rainfall and flooding. Assured all possible support from the Centre to mitigate the situation. Praying for everyone’s safety and well-being. @OfficeofUT,” Modi said in a tweet.

Part of the rescue operation, an Air Force helicopter has been made available for rescue operations in Ratnagiri district, said a statement from the Chief Minister Uddhav Thackeray’s office.

As per updates, two people swept away by strong currents of water in separate incidents that occurred in Maharashtra’s Wardha district following heavy rains on Thursday. While a woman got swept away in Waghadi river in Samudrapur tehsil, another man going on a bullock cart got swept away in a swollen nullah at Tas village in the same tehsil.