The Shiv Sena which is in power in the BMC as well as in Maharashtra has not been too gung-ho over English in the previous years. But that seems to be changing. 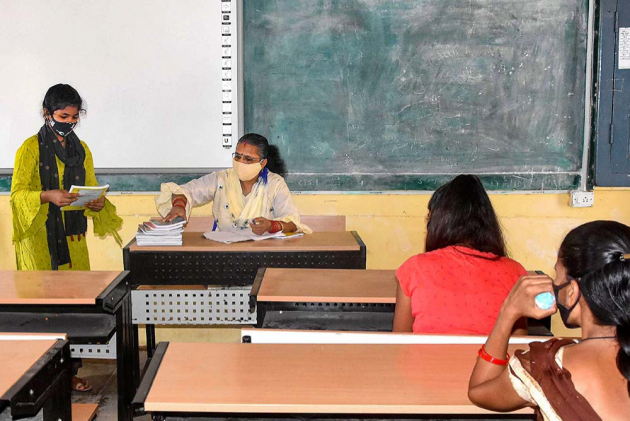 Cut to Ahmednagar, about 253 km from Mumbai. Nisha Sankhe is three months into an English language course, yet she is unable to hold a grammatically correct conversation. A teacher by profession, Nisha has already spent Rs 2,500 for the three months she was tutored. Mhaske, Raskar and Sankhe reveal that there are many more teachers like them who are headed to learn English.

But why this sudden rush to learn English?

The Maharashtra government has announced its decision to introduce a bilingual curriculum in the state-run and civic-run schools across the state. The schools will teach English along with Marathi from grade one. The Education Department has already intimated schools that teachers should start using “a lot of English words” when they are teaching. Since the medium of teaching has always been Marathi, teachers in these schools have hardly tried to learn English, said Mhaske. “We do not come from families where English is spoken. I have tried to read my son’s English books but they are difficult to understand. My son is in class VII in an English medium school,” she said.

Raskar reveals that she speaks a little English but is not word perfect. "I have six years to retire. If I don’t learn English I may lose my job,” said Raskar. These three teachers do not look at learning English as a means of enhancing their skills, for them, it is the fear of losing their jobs that has propelled their search.

Though some NGOs have come forward to help they lack volunteers. Post Covid-19 lockdown, these NGOs are finding it difficult to get volunteers who will work for free. Raskar, who also holds an administrative post in her school has sought help from a nearby English medium urging the principal to help them out with English learning modules. “Our teachers cannot afford to pay even a rupee extra. The principal is considering our request. Also, the teachers in that school too are busy to take classes for us. She has assured us of help,” said Raskar.

Initially, these bilingual classes will be implemented in 488 select schools. It will then be implemented in all schools across the state in a phased manner. The government will also introduce bilingual textbooks in these selected schools from the next academic year. The teachers – a majority who cannot follow English – have been tasked with the job of simplifying English and ensuring that the concept of the language is clear to the students in the vernacular medium schools. The teachers will have to explain lessons in both languages, said Maharashtra Education minister Varsha Gaikwad.

The new bilingual textbooks will be easy to understand and will have routine English words, concepts, easy English synonyms for Marathi words and the construction of sentences. According to the minister, a bilingual curriculum will “lessen the weight of the school bags”.
“How will this reduce the weight of books? The books may just get bulkier as there will be additional lines and paragraphs added in these new textbooks,” said Sankhe.

In a letter to chief minister Uddhav Thackeray, BJP MLA Ameet Satam has expressed dismay at the closure of numerous Marathi medium schools. In his letter, Satam says that in the decade since 2010, the number of Marathi medium schools have declined to 280 from 413. Owing to the low quality of education in these schools there has been critical attrition of students to others schools. The lack of trained and experienced teachers has also hit these schools.
In the year 2010-11 the number of students in the BMC schools across Mumbai stood at 1,02,214, whereas in 2020-21 there are only 33,114 students left in these schools. Satam has further mentioned that if the trend of the past decade continues then by the academic year 2027-28, there will be no Marathi medium schools left in the city.

Gokula Garale is not too keen on learning English but the new mandate has made it a necessity. A recent entrant into the teaching profession, she is already disillusioned with the system. She has signed in for an online English learning course through an NGO. “We have to pay Rs 500 and then learn through videos on their YouTube channel. It is a six-month course. I started a month ago. It is helpful but when there is no one to talk English with learning is difficult,” said Garale.

According to Garale, teachers in civic and state-run schools are not treated with much respect. “So we do not want to do much. The teachers have to do a lot of work other than education - census work, updating electoral rolls, vaccination, pulse polio, election work. We are treated like donkeys. After all this where will we find the time to teach? Now, these bilingual classes will be an additional headache as we have to learn English first,” she said.

The Covid-19 pandemic has seen many teachers quit their jobs. They have started taking home tuitions as there are many takers. Online schooling has given a fillip to the home tuition economy and it is not only more lucrative but also stress-free, said Garale.

The Shiv Sena which is in power in the BMC as well as in the state has not been too gung-ho over English in previous years. The party’s politics has always been based on 'Marathi pride' and has aggressively pushed for non-Marathis to learn Marathi. In June 2020, the present MVA government whose ruling constituents include Shiv Sena, NCP and the Congress Party, issued a resolution making Marathi compulsory from classes 1 to 10 including private and non-private boards including CBSE, ICSE, Cambridge curriculum and IB and Indian language medium schools.

Given the affordability factor, the state may have to offer non-expensive options for their teachers to learn English, a language foreign to them, said Raskar.