Long before Shyamanad Jalan had directed and staged ‘Haazar Chaurasi kee Maa’ we had heard of the real-life mother whose name might or might not have been Sujata. By this time, we had started reading Mashi’s books ourselves and were getting to know her literary world, far removed from our own. 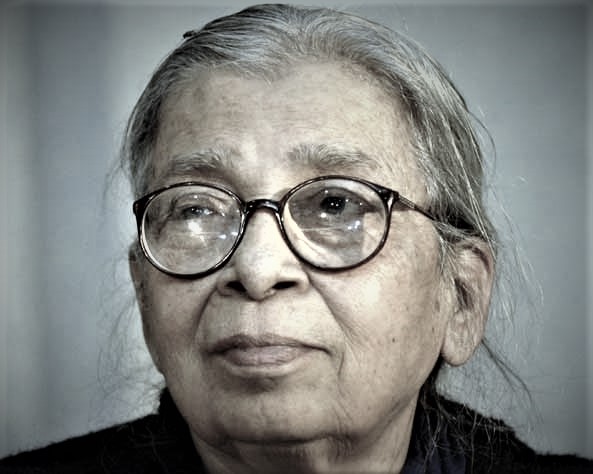 Memories co-exist differently and become different stories in their retelling; time marches on, in the meanwhile, leaving a trail of images behind, when the custodian of the stories have long gone.

Mashi in our mother’s accounts is a very different person from the one we knew and loved in our growing up years. They were nine brothers and sisters and the family lived in a house with a rambling garden where the little children played while the older ones busied themselves with studies and school. Ma, Konchi and her younger brother Falgoo were inseparable and got into trouble constantly because my mother was extremely mischievous and thought of pranks that led to further trouble often scolding and complaints from irate neighbours. Mahasweta was the eldest and away most of the time because she studied at Viswa Bharati, Santiniketan, which suited the children just fine but when she came home for her holidays, their wild days spent doing what they pleased came to an abrupt end, so they often tried to find novel ways to avoid her. Mashi’s account of these days were somewhat different, like the time she couldn’t find the younger siblings anywhere till a hushed whisper and muffled giggle led her to a tar drum outside the house where the two had sought a secure hiding place. She had dragged them out, two little creatures, completely black from head to toe, dripping with tar and scrubbed them so hard that they were without eyebrows for weeks afterwards.

As children we eagerly looked forward to our vacations in Baharampur where my grandparents, Dharitri Debi and Manish Ghatak lived. The house with its maze of rooms, passages and niches had books everywhere and many an hour was spent reading from my grandfather’s vast collection, where we first had our encounter with Doctor Doolittle or Miss Marple. Freed from school we otherwise ran amuck and wild till we heard Mashi’s unmistakable voice ordering us homewards. We dared not disobey her, she was an authority we respected but mostly worshipped.

Mahasweta Devi: A Life In Pictures

Her son Nabarun was the first in our generation but we didn’t see much of him in our childhood years, since he lived with his father, Bijon Bhattacharya, amongst the cousins present I was therefore eldest, followed by a brood of cousin brothers and sisters. To keep us occupied when evening descended and the neighbourhood grew silent interrupted with the occasional hooting of an owl, Mashi told us stories. Suddenly, the atmosphere transformed and her voice brought alive a Malay coolie who lost his arm and haunted the rooms of a doctor, whispering to him: Doctor, what have you done to my arm? Or the sahib who called his long-departed pet dog every night and the spirit of the animal appeared without fail when he heard his master whistle or then that secret cemetery in Bombay, where a young Anglo-Indian woman stood every night, hailing a taxi to take her home. Mahasweta was so brilliant at her storytelling skills that the world seemed to recede, only her voice remained, now a Malay youth; then again, a sahib with his heavily accented Bengali or a lost young woman desperately calling for a cab.

Without realizing it we had huddled closer to each other, our mothers and grandparents too drawn to our circle gradually, loth to leave the room. There were occasions she told us funny anecdotes, a little tweaked, of family members and their cow called Nyadosh, who chewed paper instead of grass and went for the occasional stroll to the terrace, going clippity clop over the staircase, to stand there and gaze up at the moon.

Mashi also told us hilarious incidents concerning the eccentricities of her father and how her mother found ways to handle his idiosyncrasies. This included an occasion when he planted an entire rose garden in their pots to impress his disbelieving wife that he had been successful in creating a Persian garden with fragrant flowers almost overnight, when the fact was that he had got the hapless gardeners to place the flowers in their pots into the soil. Gradually, we grew up and visits became infrequent to the house called Dharitri, in Laldighi.

In our own lives there was the turmoil of our parents’ separation and my brother and I had to spend months in the homes of our uncles and aunts. We were a little awkward when it came to staying with Mashi who was then married to Asit Gupta and lived in a two-storied house on Bipin Pal Road, Calcutta. We need not have worried, however, within days we had been made to feel at home and in the evenings Mashi sat us down told us stories, now different stories of the famous Jim Corbett and the man-eater of Rudraprayag or then, other stories of braveness and valour that we listened to, riveted, till it was time for bed. Yet later, as adolescents, the stories had become real life incidents and we learnt about the Naxal movement from Mashi when she visited us, often very upset at things she had witnessed first hand that very day.

Long before Shyamanad Jalan had directed and staged ‘Haazar Chaurasi kee Maa’ we had heard of the real-life mother whose name might or might not have been Sujata. By this time, we had started reading Mashi’s books ourselves and were getting to know her literary world, far removed from our own. Mashi had started editing the quarterly Bortika after my grandfather’s death and through its pages we read of the marginalized peoples grass root level issues, of the landless labourers and their struggles, especially in eastern India. Mashi’s political activism had now given her a new standing in a world where few had ventured before and she now became their Ma, a fiercely outspoken leader who would write fearlessly about caste, class, and patriarchy taking her subjects from life of the subaltern. Aranyer Adhikar (The Rights of the Forest) is a brilliantly researched historical novel about the Munda Insurrection of 1899-1900, where she explores a narrative that is literary Bengali, bureaucratic Bengali and tribal Bengali. Her iconic stature of a Devi happened as she experimented with historical fiction researching every angle she represented in fiction, as Gayatri Spivak writes: The plausibility of a Jashoda (Stanadayini or Breast-Giver), a Draupadi (Draupadi), a Birsa Munda (Aranyer Adhikar) is that they could have existed as subalterns in a specific historical moment imagined and tested by orthodox assumptions.’ By Devi’s own account, Stanadayini is a parable of India after decolonization.

It had been one afternoon, after a long conversation that I had asked Mashi if she would allow me to work on Breast Stories as a curatorial project, with artists and filmmakers. She had agreed and to make it formal wrote me a letter of consent with her permission. An excerpt comes to mind from the book: For twelve years men run the hunt. Then comes the women’s turn. It’s Jani Parab. Like the men they too go out with bow and arrow. They run in forest and hill. They kill hedgehogs, rabbits, birds, whatever they get. Then they picnic together, drink liquor, sing, and return home at evening. They do exactly what men do. Once in twelve years they light the fire of the spring festival and start talking. Budhni tells stories. That time we killed a leopard. I was young then. The old women listen, the ageing women cook, the young women sing. Jani Parab is a very exciting festival. That day every woman, in every household, goes out. That’s their day. The whole day the women are at liberty. This is obviously a survival of an ancient custom. As soon as the contractor leapt for her body, to Mary Oraon’s thinking, he became an animal, a hunt animal. The hunt is a tremendous release, purification. On that day, the hunt is not a sin. The killing gives her tremendous release.’ Amar Kanwar past work is about the audio-visual narrative that speaks of the unspeakable. Telling the story of violation, Kanwar refrains from showing a single explicit scene of sexual violence in his film. And yet the haunting music and lingering footage of benign landscapes and beautiful flowers never let you wander too far from the scenes of the crime, which makes the occurrence more brutal and visual, by its absence. Kanwar has already been working on the film from Stanadayini; we now have to find the others. It is our turn now to tell Mahasweta Devi’s stories.