Vinod Daniel, who is also a board member of Paris-based International Council of Museums (ICOM), said, museums in India should immediately do a risk management exercise. 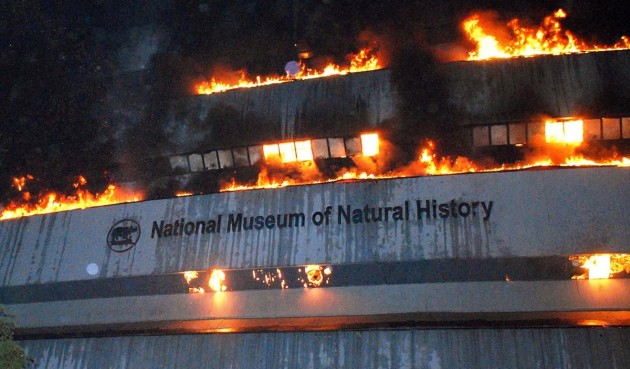 A majority of museums and cultural repositories in India stand at risk of suffering "grave damage" in the event of a major fire, an international expert has cautioned and suggested that a disaster management plan should be properly implemented by these institutions.

Vinod Daniel, an India-born Australian and a top museum specialist, said the fire at the National Museum of Brazil, in which a massive collection of it was destroyed, holds valuable lessons for developing countries, including India.

"The fire in Brazil this year and the one which gutted the National Museum of Natural History in Delhi in 2016, should serve as grim reminders about the perils our invaluable treasures face, due to lack of or inadequacy of a disaster management plan, particularly against fire incidents," he said.

The 56-year-old, who is also a board member of Paris-based International Council of Museums (ICOM), said, museums in India should immediately do a risk management exercise.

"Once they conduct the exercise, I reckon, the biggest threat that will emerge for them would be fire. Also, at present, a majority of museums, old libraries and cultural repositories do not have proper disaster management plan in place, so they stand at risk of suffering grave damage in case of a major fire, as it happened in Brazil," Daniel told media in an interview.

However, some of the museums, such as the Chhatrapati Shivaji Maharaj Vastu Sangrahalaya (formerly named the Prince of Wales Museum of Western India), do have a management policy and a roadmap to deal with such incidents, he said.

Daniel, also chairman of AusHeritage, a non-profit cultural heritage network in Australia, suggested that besides having a good plan for safekeeping, museums should invest in documentation of artefacts and training of staff for proper handling of exhibits, in the wake of a disaster.

"Biggest risks to collections in developing countries, like India are natural disasters such as earthquake and flood, and fire, which totally destroys. In case of a fire, a museum serious about these issues will have a proper fire alarm system, have a list of key contact people, and team of first responders, who know where are the rarest collections, and try rescuing those.

"They would also know what kind of substance to use for extinguishing the flames, whether it is gas or something else, to put out fire on books, manuscripts and artefacts. Lack of knowledge ends up damaging more than a fire," he said.

India currently has about 900 museums, from state-owned to private and local museums, said Daniel, an IIT-Delhi graduate and an IIT-Madras alumnus, who started his career with the J Paul Getty Museum in Los Angeles in the US as a conservation scientist and then moved to Australia from there.

India also has some of the oldest and fascinating libraries with rare, rich collection of books, like the Connemara Library in Chennai, he said.

"The collection is majestic, and so is the building, but when it comes to fire disaster management plan there, it leaves a lot to be desired," he lamented.

The Sydney-based expert also claimed that not much fund is diverted towards creation of fire-safety mechanism as "it is not seen as a visible, attractive exercise by many politicians compared to say cutting a ribbon to inaugurate a new gallery".

He also pitched for introduction of more courses in museology in various academic institutions to inculcate the value of history and heritage among the people, especially the youth.

Asked, what will be the future of museums in the digital ages, Daniel, who has worked with museums in Mumbai, Chennai, Egypt and Myanmar, among other institutions, responded in a very optimistic tone.

"Based on existing research, I can say that the fascination for seeing the original object has not changed, even in the age of virtual reality and internet. Virtual reality can never replace the experience of seeing the original artefacts or paintings. So, people still queue up outside Louvre Museum (home of the Mona Lisa) or the National Palace Museum in Taipei," he said.

Daniel asserted that newer technologies should be used by museums to enhance the experience of visitors, and virtual experience is for those people, who either live far-off from the museum or do not have access to the place. So, one experience does not cut into another, he said.

He also said that China and Singapore have invested big on museums, among other countries.

"China already has some of the biggest museums, and now it is building 200-300 museums every year. Singapore, particularly stands out, since till 1990s, the country was in poor shape and after its economy picked up, it made heritage an important part of its policy-making, and set up a National Heritage Board," Daniel said.