A journalism student at the Varsity, Pandey says the new law has 'affected his conscience,' adding, 'today the CAA is targetting Muslims, tomorrow it will be the Dalits, women and poor of the country.' 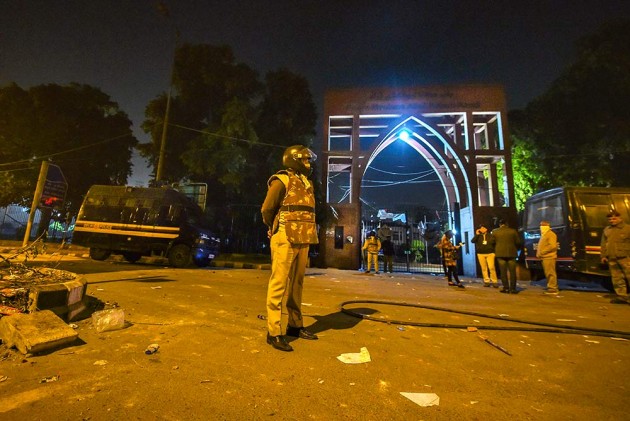 "Discrimination doesn't discriminate," says twenty-one-year-old Aman Ajay Pandey, who has been participating in protests against the amended Citizenship law over the past one week at Jamia Millia Islamia.

A journalism student at the Varsity, Pandey says the new law has "affected his conscience," adding, "today the CAA is targetting Muslims, tomorrow it will be the Dalits, women and poor of the country."

Pandey says the Centre is targetting one community, but it's not limited to them, adding "I am a Hindu and even my freedom of expression has been stifled."

"In a Hindu Rashtra," he says, "I fulfil the criteria -- Male, Brahmin and a native of Hindi Heartland --, still, I vehemently oppose the amended law"

"They’ll discriminate on the basis on people’s economic status – rich and poor. They’ll target the weak and throw them out," he says.

Pandey's colleague, Ishita, says the matter is not confined to "Hindu-Muslim identities" anymore.

"It's about countrymen... How could they make my own people feel so pathetic?" says Ishita, recalling how a Muslim friend, Afreen, the other day, asked: “How much time do I have?”

She continues: "This is not acceptable, and I will fight against such a law till the end."

Another university student Shalini says calling the amended Act "discriminatory would be an understatement."

Shalini adds one can't wait till it reaches their doorstep. "People need to stand up for what's right, even if it does not affect them. What is the point of education if we cannot understand a communal motive behind an Act,” she said.

On Sunday, police barged into Jamia Millia Islamia campus, fired tear gas shells, and lathi-charged students, following vandalism near New Friends Colony (NFC) in South Delhi. The students disassociated themselves from the violence that prompted police to chase the protesters away.

Multiple students sustained injuries after police entered the reading hall of the central library on the main campus.

Hemant, one of the several student detainees last night, says the Act "boycotts Muslims," adding, they (students) wanted to be the "voice of the voiceless."

Not everyone is educated enough, he says, asking: "How will some of these people provide documents from as far back as 1971?"

Also Read: The Unbearable Nothingness Of Being Sri Lankan Hindu

At the police station, Hemant said the cops refused to answer any of their questions.

"They said: 'The police said they had orders from higher authorities that the university should be a zero-tolerance area," Hemant said.

(Sarah Khan, a journalism student, contributed to this report.)