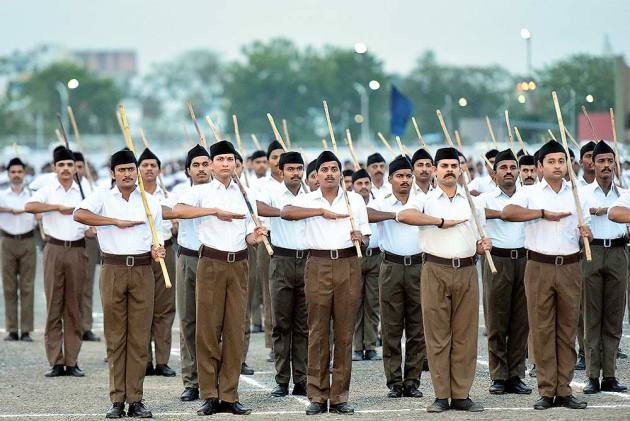 An article in an RSS-linked Bengali magazine has stirred up a hornet's nest by claiming that both BJP and West Bengal Chief Minister Mamata Banerjee share the dream of "Congress-mukt Bharat" (Congress-free India).

While the BJP distanced itself from the article in 'Swastika' calling it "baseless" and far from the party's official stand, the Trinamool Congress also rubbished allegations of "understanding with the saffron camp" but the Congress said that the "cat is now out of the bag".

The article titled 'Keno itihas muchte chaichen Mamata? Shilpo agroho na Sonia khotom?' (Why is Mamata keen on erasing history? To attract investment or to destroy Sonia?) was written by Nirmalya Mukhopadhyay and published in the December 13 issue of the magazine.

It speaks about the TMC chairperson's recent meeting with Prime Minister Narendra Modi in New Delhi, and claimed that both share the dream of "Congress-free India".

"It is clear from her changing stance that this is not the same Mamata Banerjee. Narendra Modi's dream is Congress-free India. I feel that Mamata now also believes in the same dream. That's why she is trying to erase the history to sell this dream," the author wrote.

The writer also wondered what "political calculation" Banerjee has in her mind that she is bringing her "enemies and known rivals" close to her.

RSS state general secretary Jishnu Basu said that he is yet to go through the article.

"I am yet to read the article, so I cannot comment on it. But I don't know about any understanding as the truth is that 62 BJP workers have been killed in the post-poll violence in West Bengal," Basu told PTI.

RSS sources said that the magazine is linked with the organisation as its editorial and managing committee has several people who have an RSS background.

State BJP spokesperson Shamik Bhattacharya termed the article "baseless" and said it has nothing to do with the party's policy or stand.

"It has nothing to do with the BJP’s policy or stand. Swastika might be an RSS-linked magazine, but many articles in it come out which are not in tandem with our policies and principles," he said.

Senior TMC leader Kunal Ghosh dubbed the allegations of "understanding with the BJP" as baseless.

"The allegations of understanding with the BJP are baseless. Mamata Banerjee is the strongest opposition face against the saffron camp," the TMC's state general secretary said.

The opposition Congress, however, alleged that the "cat is out of the bag".

"The secret is now out in the open. For a long time, we have been saying that BJP and the TMC have a covert understanding and have been working together to destroy Congress. But they won't succeed," Congress leader Pradip Bhattacharya said.

The TMC, which is trying to make inroads in other states, has been up in the arms against the Congress over its alleged failure to counter the BJP.

In an escalation in the war of words between the TMC and the Congress, Banerjee's party had last week claimed that it is now the "real Congress", given the fact that the "war-weary" grand old party has failed to perform its role as the main opposition to the BJP.

Ties between the Congress and the TMC got further strained after the ruling party in West Bengal, in an article in its mouthpiece 'Jago Bangla', asserted that Banerjee, and not Rahul Gandhi, has emerged as the face of the opposition against Prime Minister Narendra Modi.