Mamata Banerjee during her recent Mumbai visit had made a cryptic statement that 'there is no UPA now'. 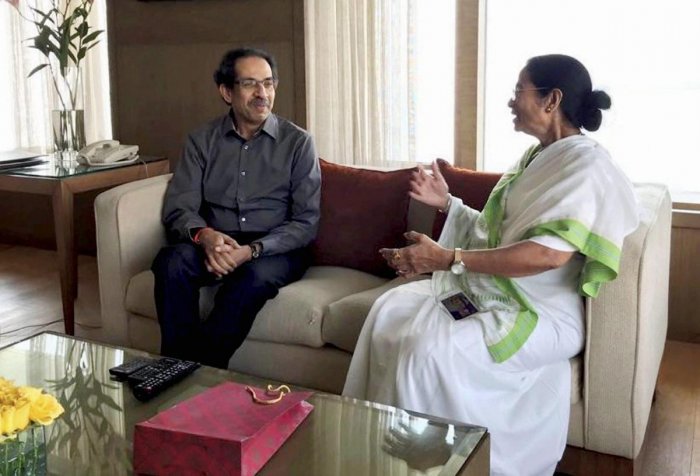 In his weekly column 'Rokhthok' in the Sena mouthpiece Saamana, Sanjay Raut also claimed Banerjee having said that her party Trinamool Congress (TMC) will not test political waters in Maharashtra.

Notably, the TMC leadership on Saturday said it would continue to cobble up an alternative front as the Congress "failed to lead the fight" against the BJP.

Banerjee during her recent Mumbai visit had made a cryptic statement that "there is no UPA now".

On Friday, TMC mouthpiece 'Jago Bangla' had launched a fresh attack on the Congress, saying it has gone into a "deep freezer".

Recently, 'Jago Bangla' had also claimed that Mamata Banerjee, and not Congress leader Rahul Gandhi, has emerged as the face of the opposition against Prime Minister Narendra Modi.

Raut, whose party shares power with the NCP and Congress in Maharashtra, on Sunday claimed "it looks like Banerjee is contemplating something new excluding the Congress".
He also claimed that during her meeting with Shiv Sena leader and state minister Aaditya Thackeray here a few days back, she told the latter that "we will not come here as the Shiv Sena and the NCP are strong".

The Rajya Sabha member noted that the TMC is going to contest the forthcoming Assembly polls in neighbouring Goa and is also spreading its wings in the north-eastern states of Tripura and Meghalaya.

He said during her Mumbai visit, Banerjee had discussed with Aaditya Thackeray the exchange of tourism and culture between the two states.

She sought land for the construction Bengal Bhavan in Mumbai to enable patients to get accommodation while coming for treatment here, especially at the Tata cancer hospital, said Raut, who is the executive editor of Saamana.

"The two states share an emotional bond dating back to history. It was decided that the bond should be further strengthened for the benefit of the younger generation so that they can get a peak into the history," the Shiv Sena leader said.

On Saturday, Saamana said keeping the Congress away from national politics and creating an opposition alliance parallel to the UPA without it is akin to strengthening the ruling BJP and the "fascist" forces.

The Marathi daily had also said those who don't want a Congress-led United Progressive Alliance (UPA) should make their stand clear publicly, instead of creating confusion by talking behind back.

During her Mumbai visit, Aaditya Thackeray and Raut had met Banerjee on behalf of Chief Minister Uddhav Thackeray, who is currently recuperating after a cervical spine surgery.