Banerjee, seated on a wheelchair with her left foot plastered, greeted several party activists gathered outside the Woodburn Block of the hospital 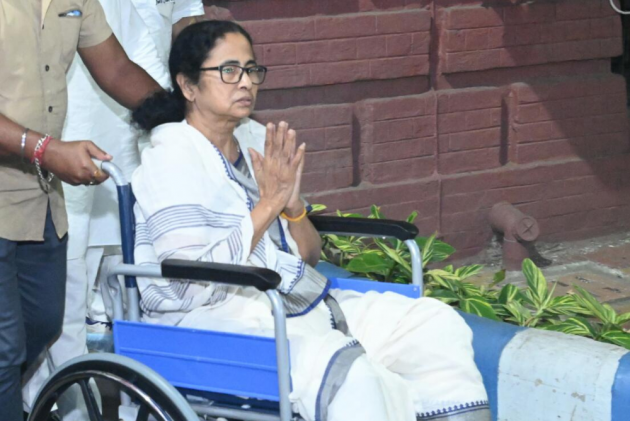 After the doctors found her recovery to be "satisfactory", West Bengal Chief Minister Mamata Banerjee was discharged from state-run SSKM Hospital in Kolkata.

The doctors reached this conclusion after Banerjee repeatedly requested them to discharge her from the hospital she was being treated at.

Banerjee, seated on a wheelchair with her left foot plastered, greeted several party activists gathered outside the Woodburn Block of the hospital.

She left the hospital in her vehicle for her Kalighat residence.

"Her condition has improved a lot and she repeatedly insisted to be discharged from the hospital. She will be able to move with restrictions but she needs to come back for another round of check-up within a week," the doctor said.

Banerjee fell and suffered severe injuries in her left ankle and foot and right shoulder, forearm and neck after she was allegedly pushed by 4-5 unidentified persons on Wednesday evening during her campaigning in the Nandigram seat, from where she is contesting in this assembly election.

She was rushed to SSKM Hospital in Kolkata from Purba Medinipur district through a green corridor and was kept under observation for 48 hours.