On one hand, Mamata Banerjee's Trinamool Congress has a rapport with parties like NCP and Shiv Sena, while also maintaining friendly relation with the Akhilesh Yadav-led Samajwadi Party in UP on the other. 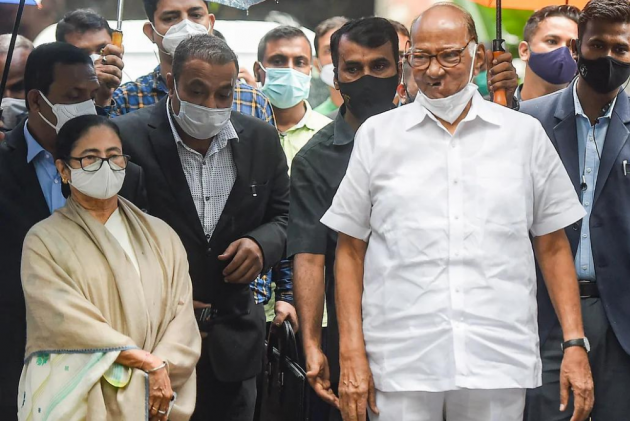 Over the past couple of months, the 23-year-old Trinamool Congress (TMC) made it amply evident that it was looking to replace the 136-year-old Congress as the leader of an opposition coalition to take on the Narendra Modi-led National Democratic Alliance (NDA) government in the 2024 Lok Sabha elections. In the past couple of days, the agenda was made formal, with the TMC rubbishing the very existence of the Congress-led United Progressive Alliance (UPA), which is treated as the main opposition coalition at the national level.

First, on Wednesday, the TMC chairperson and West Bengal chief minister Mamata Banerjee said in Maharashtra, “What UPA? There is no UPA now. We will decide on it together.”

This was immediately after her meeting with Nationalist Congress Party (NCP) chief Sharad Pawar at the latter's Mumbai residence. Her statement came as an answer to the question if Pawar would be leading the UPA.

NCP is not only an ally of the Congress at the national level, but also a partner in the Maha Vikas Aghadi coalition that runs the government in Maharashtra, along with the Congress and Shiv Sena.

While addressing the media after her meeting with the NCP leadership, she also took a veiled jibe at Rahul Gandhi, though without naming him, when she said, “you can’t be abroad most of the time.”

Second, on Thursday, during a press conference in New Delhi addressed by TMC Rajya Sabha MPs Derek O’Brien, Sushmita Dev and Shanta Chhetri, the party elaborated on what Banerjee meant.

“UPA was formed in 2004 for better governance and it continued till 2014. However, there has been no UPA for the last few years. Congress had nearly 150 MPs in the Parliament back then, now they have 50. Left front had 62 seats back then and now they have only 6 seats. The RJD (Rashtriya Janata Dal) had 25 seats now they have 0. The dynamics have changed,” O’Brien said.

Political strategist Prashant Kishor, who is working at the TMC’s consultant and is believed to be one of the key architects of the TMC’s national aspirations, made the TMC positions clearer in a tweet on Thursday: “The IDEA and SPACE that #Congress represents is vital for a strong opposition. But Congress’ leadership is not the DIVINE RIGHT of an individual especially when the party has lost more than 90 per cent elections in the last 10 years. Let opposition leadership be decided Democratically.”

The battle is not to exclude Congress but to remove it from the position of leadership in a possible opposition alliance.

The Congress did hit back at the TMC. The party’s Lok Sabha MP and Bengal unit president Adhir Ranjan Chowdhury called Banerjee “Modi’s informer.” Congress leader Kapil Sibal tweeted, “Without the Congress, UPA will be a body without a soul. Time to show opposition unity.” Congress general secretary KC Venugopal said that defeating the BJP without Congress was akin to daydreaming.

But what should concern Congress most is that none of the parties they have been working together with is criticising the TMC for its aggressive mission to weaken the Congress.

Take, for example, Pawar’s statement to the media on Wednesday. While insisting that there was no question of excluding anyone, he, too, spoke of building a common platform. “We discussed the prevailing situation and the need for all like-minded parties to come together and provide a strong alternative to the BJP. We have to provide a collective leadership platform and a strong alternative to BJP. Leadership is not an issue at present,” he said.

On the one hand, maintaining a good rapport with parties like NCP and Shiv Sena, and on the other a friendly relation with the Akhilesh Yadav-led Samajwadi Party in Uttar Pradesh, the TMC is clearly also on a mission to rob the Congress of its allies.

It is interesting to note that even though the TMC is contesting Arvind Kejriwal’s Aam Aadmi Party (AAP) in Goa and has also announced its plan to expand in Haryana – another state that APP, too, is eying – the TMC has so long refrained from targeting Kejriwal’s party.

In this context, it is interesting to see how or if the TMC approaches Congress allies such as the M K Stalin-led Dravida Munnetra Kazhagam (DMK), the ruling party of Tamil Nadu that is believed to be in a good position, as of now, to be able to send a good number of members to the Lok Sabha; or the Karnataka based Janata Dal (Secular).

None of these parties has so far objected, at least publicly, to the TMC’s relentless attack on the Congress, even as the Congress keeps alleging that these attempts would weaken the much-required unity of opposition parties.

“We are thinking of a different kind of alliance, beyond the Congress’ formula. Congress cannot bring in parties like the YSR Congress. But we can try,” a TMC Rajya Sabha MP explained while speaking to Outlook on condition of anonymity.

For the Congress, which has been plagued with a leadership crisis, the situation leaves no time to waste.