The decision was taken after EC held a meeting over a report which was submitted on Friday and pointed out lapses on part of the Chief Minister's security personnel. 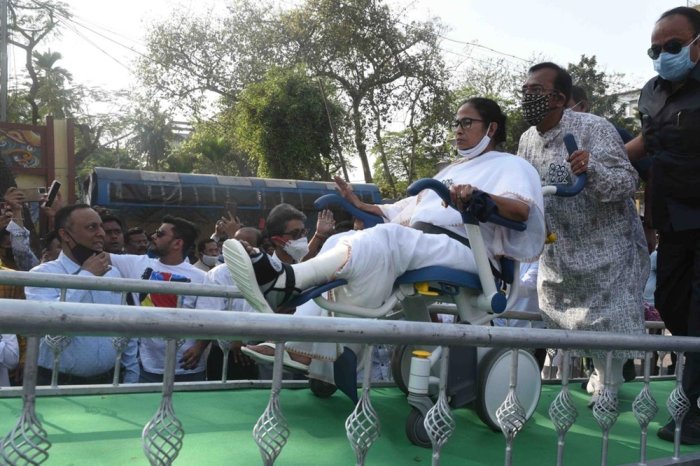 The election body also removed District Magistrate Vibhu Goel and transferred him to a non-election post.

The decisions come following a meeting of the EC over the report submitted by the West Bengal chief secretary and the joint report by special general observers Ajay Nayak and Vivek
Dube over the incident that happened on March 10, an official statement said.

"After going through the reports the commission decided that Vivek Sahay IPS, Director Security shall be removed from the post of the Director Security and be placed under suspension immediately. The charges must be framed against him within a week for grossly failing in the discharge of his primary duty as Director Security to protect the Z+ protectee," it said.

The chief secretary, in consultation with the director-general of police, is authorised to decide on the new Director Security immediately, the EC said.

"Smita Pandey be posted immediately as DM and DEO, Purba Medinipur in place of Vibhu Goel who shall be transferred to a non-election post. Pravin Prakash, SP Purba Medinipur shall also be placed under suspension immediately and charges shall be framed against him for a major failure of bandobast," the statement said.

Sunil Kumar Yadav was made the new SP of Purba Medinipur.

"Chief Secretary shall ensure that the investigation of Nandigram Case is completed and consequential action is taken as per law in next 15 days. A report in this regard shall be sent to the Commission by 31st march 2021," the EC said.