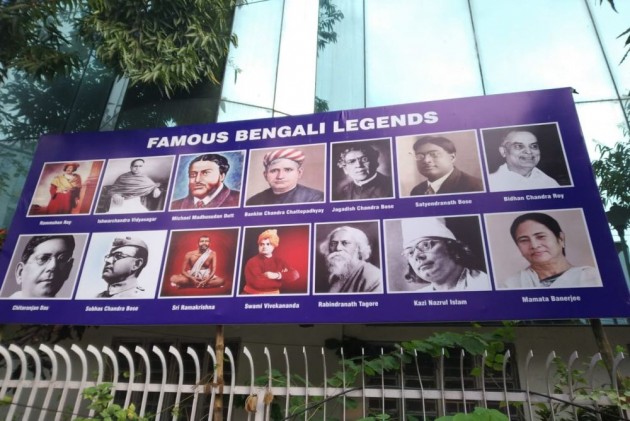 West Bengal Chief Minister Mamata Banerjee's photograph, which was put up on a giant flex among revolutionary hero Netaji Subhas Chandra Bose and Nobel laureate poet Rabindra Nath Tagore, created a stir among the netizens as well as commuters in Kolkata.

The flex bearing the headline "Famous Bengali legends' near a busy crossing at Sector 5 in Salt Lake contains pictures in two rows of 13 eminent persons from the 19th and 20th century-spanning almost all fields such as literature, the country's freedom struggle, social and religious reform movements, science and politics. The 14th and last photo in the lower row is that of a smiling Banerjee.

The Chief Minister's photograph finding its place beside such colossal features, and that too under the caption "Famous Bengali Legends" has triggered howls of protest and sarcastic references.

"This is too much. Mamata Banerjee may be the most popular leader in West Bengal now, but to include her in the same bracket as such legends, isn't that too much?" asked Sudhirti Chowdhury, a college student.

IANS tried to get in touch with several Trinamool leaders.

Bidhannagar municipality chairperson Krishna Chakraborty parried the question saying the area where the flex appears was outside the purview of the civic body.

State Fire Services Minister Sujit Bose denied the existence of the flex. "I don't know any such flex has been put up. I have no idea about its existence. How can I comment on something unless I can confirm that it exists?" Bose replied when IANS pointed out to him that it has the photo of the flex.