The BJP lost two seats to the ruling TMC in West Bengal where bypolls were conducted in four seats on October 30. 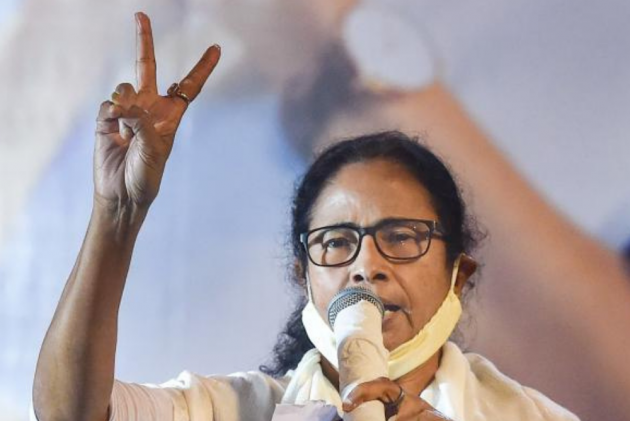 West Bengal’s ruling party, Mamata Banerjee’s Trinamool Congress (TMC), recorded victories with massive margins in the October 30 bypolls, the results of which were announced on Tuesday.

Of the seats, the TMC recorded a 1.64 lakh winning margin in Dinhata of Cooch Behar district, the highest assembly election margin ever recorded in the state. In Gosaba of South 24-Parganas district, the TMC’s winning margin stood at 1.43 lakh votes, which too trumped all past records, falling short only of Dinhata.

In the assembly general election held six months ago, the TMC’s Jayanta Naskar had won Gosaba by a margin of 23,619 votes and Khardaha by 28,140 votes, while the BJP won Dinhata by 57 votes and Santipur by 15,878 votes.

After the results were out, the chief minister wrote in a tweet, “This victory is people's victory, as it shows how Bengal will always choose development and unity over propaganda and hate politics. With people's blessings, we promise to continue taking Bengal to greater heights!”

The BJP’s national vice president Dilip Ghosh tried to put up a brave face at the press conference in Kolkata after the results were out. “Bypolls in Bengal usually witness such one-sided polling. It’s nothing now. Opposition parties never get a level playing ground during any by-election,” Ghosh said.

That, however, may not be factually correct.

Bypoll results do not always go in favour of the ruling party, as was evident from the results of the by-poll in 2009 when the TMC, then a rising power, bagged eight of the 10 assembly seats, with the ruling force, the Left Front winning only 2.

Of these four seats where polling took place on September 30, the BJP had won Dinhata and Santipur in the March-April general elections. However, both of BJP’s winners being sitting Lok Sabha MPs, resigned from the assembly seats, necessitating the bypolls.

In the by-election, both the BJP MPs led the party’s campaign in the seats they vacated – Cooch Behar MP Nisith Pramanik in Dinhata and Ranaghat MP Jagannath Sarkar in Santipur. But the results have been demoralising for them, to say the least, especially at a time when the party is already struggling to keep its flock together and safe from the TMC’s poaching drive.

Since the assembly general elections results were announced in May, as many as five BJP MLAs have switched over to the TMC along with a Lok Sabha MP.

The TMC had won 213 seats in the assembly general election and the BJP and its ally All Jharkhand Students’ Union had won 77. The TMC’s tally had reached 215 after winning the deferred general election in two seats held on September 30.

Now, after wresting two more seats from the BJP, the TMC’s tally stands formally at 217 in the 294 seat House. Five more MLAs remain with BJP on paper but are operational with the TMC for all practical purposes.

On the other hand, the BJP’s strength is down formally by two and five more when taking the defections into consideration.