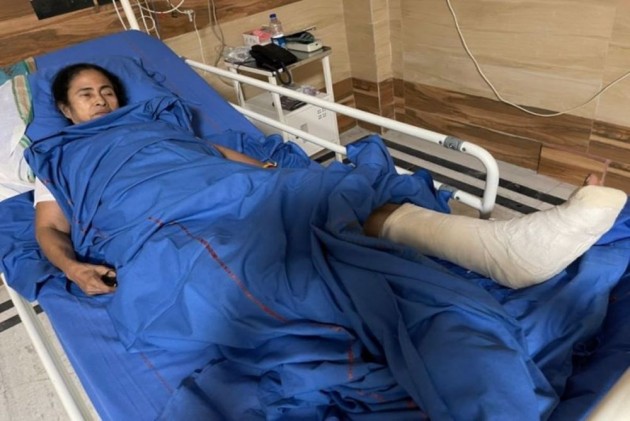 The health condition of West Bengal Chief Minister Mamata Banerjee who has been undergoing treatment at a government hospital has "improved slightly and she is stable", doctors treating her said on Thursday evening. Mamata Banerjee was admitted to a  state-run hospital after suffering injuries in an alleged attack in Nandigram.

The doctors informed that Banerjee is responding to treatment and that the reports of the tests conducted on her were satisfactory.

"But the X-Ray done on her left leg showed a degenerative joint disease. We are treating that," a senior doctor at the state-run SSKM Hospital said.

'Might Have To Campaign On A Wheelchair,' Says Mamata From Hospital Bed

Degenerative joint disease is a type of arthritis that occurs when flexible tissue at the ends of bones wears down.

X-Ray was also done on her shoulders, injured ankle and legs. Doctors also did a CT scan on her neck while a USG was performed on her abdomen.

She also has low sodium concentration in the blood and was given medication to cure it.

"The swelling on her left ankle has subsided. Overall her condition has improved slightly," he said adding that the CM was given light food.

Asked when Banerjee could be discharged from the hospital, he said that the team of six doctors treating her would assess her health condition on Friday morning and make a decision.

Sources in the hospital said that doctors are planning to conduct another series of medical tests on Friday morning.

Banerjee suffered injuries after she was allegedly pushed by unknown people while campaigning for the assembly elections in Nandigram constituency, where she is pitted against her protege-turned-adversary Suvendu Adhikary of the BJP and Minakshi Mukherjee of the CPI(M).