An I-PAC team, which went to Tripura last week for a survey on behalf of the TMC for the 2023 assembly elections, had allegedly been detained 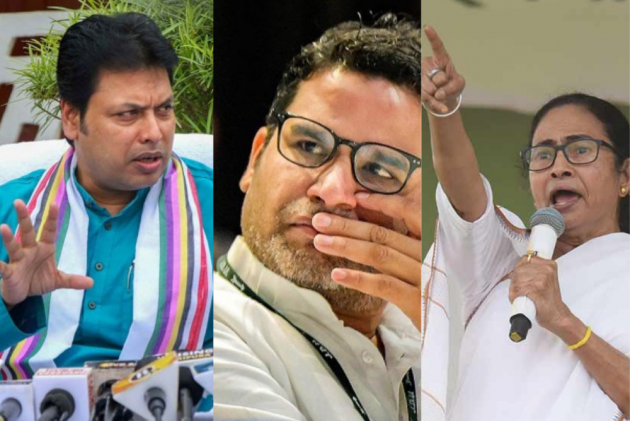 Within hours after TMC’s Derek O'Brien landed in Tripura, the I-PAC team lead by Prashant Kishor was granted bail by the court.

Escalating the party's bid to increase footprints in Tripura, the Trinamool Congress had decided to intensify activities to bail out 23 members of a survey team from poll strategist Prashant Kishor's organisation, Indian Political Action Committee (I-PAC), who have been detained at an Agartala hotel since Sunday.

IPAC Team Not Under House Arrest But In 'Quarantine', Waiting For Covid Test Result: Tripura Police

These visits come following the visit of a three-member delegation comprising Bengal education minister Bratya Basu, law minister Malay Ghatak and labour wing leader Ritabrata Banerjee that landed in Agartala on Wednesday. They were still there till Thursday afternoon and were expected to stay back till Friday or Saturday.

Abhishek's visit to the state on Friday is only likely to intensify the TMC's Tripura campaign further.

"The BJP government in Tripura has detained I-PAC surveyors undemocratically and illegally. If we don't take the issue to the greatest extent possible, the BJP will be encouraged to further threaten and harass our workers and supporters in Tripura. We must set an example before the state's anti-BJP population that the TMC will use all its might to stand by them in the fight for toppling the Biplab Deb government in 2023," said a senior TMC who did not want to be identified.

"We need to assure our supporters that the TMC will do everything to stand by them," said a TMC veteran who is known to be close to Abhishek, who is to spearhead the Bengal-based party's national expansion plan.

The TMC does not yet have a widely recognisable face in Tripura but the party is in the lookout for such faces from the BJP and the Left camp.

Meanwhile, the BJP in Tripura has a plan to stage agitations on the streets when Abhishek reaches Agartala. The demonstrators could carry black flags to protest political violence and intimidation of BJP workers in Bengal since the Assembly election result, said a senior leader of West Bengal BJP who is keeping in touch with the party's Tripura leaders.