The oxygen plant, worth over Rs 9 crore and imported from Germany, was installed at the hospital a few weeks ago, police said. 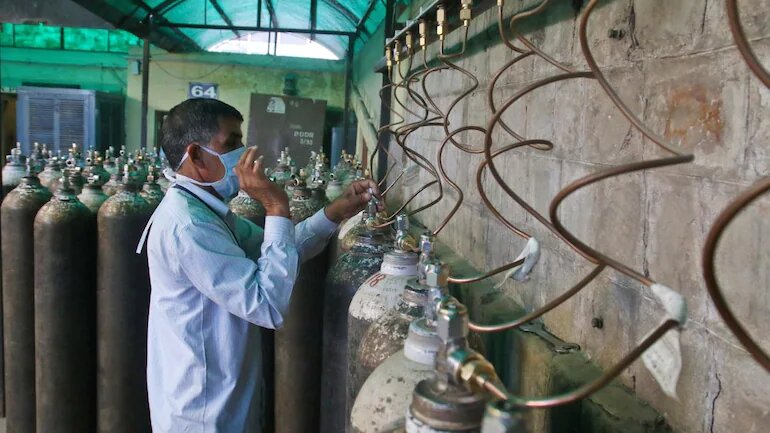 Delhi police on Tuesday arrested a man for allegedly stealing copper pipes of an oxygen plant, which was installed at Sanjay Gandhi Hospital in outer Delhi's Mangolapuri to facilitate oxygen supply to Covid ward and operation theatre.

Theft of around 40 kilograms of copper pipes serving as the carrier of oxygen, has disrupted the functionality of the entire oxygen plant.

Oxygen plants were set up at many hospitals in the national capital during the second wave of the coronavirus pandemic to meet requirements of the life-saving gas to treat Covid patients.

The oxygen plant, worth over Rs 9 crore and imported from Germany, was installed at the hospital a few weeks ago, police said.

Pawan (24) said that he had planned to sell the pipes and earn some money to pay for his alcohol addiction, they said.

He was identified through footage from CCTV cameras installed on the hospital's premises, police said.

They said as he lived near the hospital, he was able to steal such a large quantity, and he did not realise the importance of the equipment.

The Sanjay Gandhi Hospital's deputy medical superintendent had lodged a complaint at the Mangolapuri police station, saying on July 15, miscreants had stolen copper pipes of the plant installed there for the Covid ward and operation theatre (OT).

The hospital had deployed a full-time guard at the plant, but at the time of the theft, he was found missing from his place of duty, police said.

Deputy Commissioner of Police (Outer) Parvinder Singh said, "We have registered a case under section 379 (theft) of the Indian Penal Code, and Constable Vikash identified the accused with the help of CCTV footage."

"When our team reached at his (Pawan’s) house, he was not found there. Later, based on specific information, he was arrested from near the Sanjay Gandhi Hospital and the copper pipes, weighing approximately 40 kgs, was recovered from him while he was going to sell them," he said.