CCTV footage showed a man resembling Vikas Dubey at a Faridabad hotel. The police have raided the hotel. 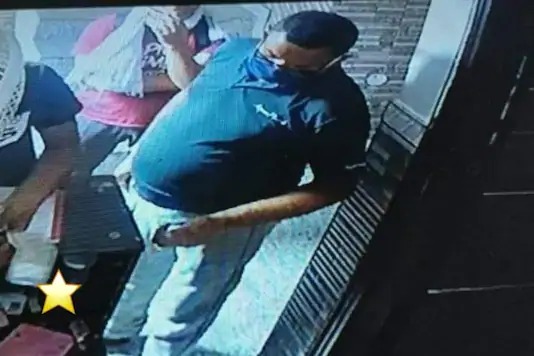 Gangster Vikas Dubey, who is absconding since his henchmen killed eight policemen in Kanpur during a raid, has reportedly been spotted at a hotel in Faridabad on Tuesday night.

However, by the time police could close in on him, he fled the hotel.

The CCTV footage showed a man resembling Vikas Dubey at a Faridabad hotel. The police have raided the hotel.

As per the intelligence reports, Dubey had stayed at a small-budget hotel located in the populated Badkhal Chowk area under a fake identity.

Joint teams of Haryana and Uttar Pradesh have detained a Dubey aide who confirmed that Dubey stayed with him at the hotel.

The police have managed to access a CCTV grab which showed Dubey, donning a dark black shirt, jeans and mask, was present in the hotel.

Another CCTV grab showed he was standing on the roadside with a bag, awaiting a vehicle.

As per the hotel staff, Dubey had identified himself as Ankur, and had escaped the hotel before the police arrived.

"As per our information, Vikas Dubey is using a public transport for his movement in Delhi and the NCR (National Capital Region). The CCTV footage clearly showed he was waiting for a vehicle on the roadside," a senior police official told IANS.

Earlier on Wednesday, the gangster’s close aide, Amar Dubey, was gunned down in an encounter in Himachal Pradesh by Uttar Prades’s Special Task Force. Another aide was arrested in Uttar Pradesh during an encounter.

Dubey is absconding ever since he laid an ambush and killed eight policemen when they were on their way to nab him. Police have named 21 people in the FIR registered after the attack. The FIR also mentioned 50-60 unidentified people.