A farmer has hired three security guards and nine dogs to secure trees bearing a rare variety of mangoes that are worth around Rs 21,000 per fruit. 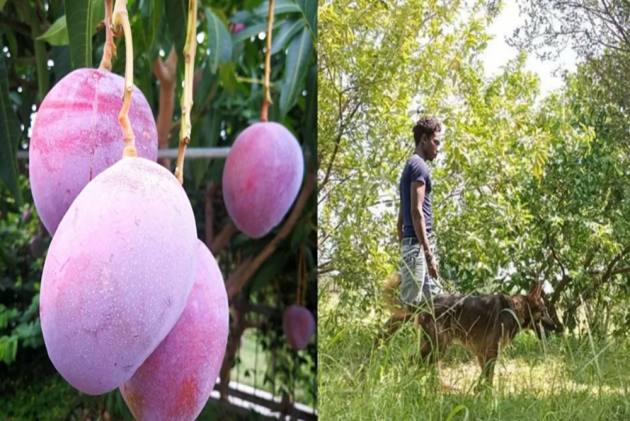 In Madhya Pradesh’s Jabalpur, security cover to politicians and celebrities has become passe, as similar safety cover is now being extended to mangoes. ‘Taiyo No Tamago’, a special Japanese variety of mango which is grown under controlled environment in Japan and is considered among the costliest mangoes, is grown at a private farmhouse at Chargawan road in Jabalpur.

You read that right!

A farmer has hired three security guards and nine dogs to secure trees bearing a rare variety of mangoes that are worth around Rs 21,000 per fruit.

These trees are similar to the ones bearing Taiyo No Tamago, a Japanese variety of mango, which is among the costliest fruits in the world and is grown in a controlled environment.

Speaking to PTI, Jabalpur resident Sankalp Singh Parihar said there are 1,100 mango trees on his 12-acre farm at Chargawan Road, and of these, 50 belong to a breed similar to Taiyo No Tamago.

“There are only three to four fruits on these 50 trees at present. To secure these trees, we have pressed into service three guards and nine dogs including six German Shepherds,” Parihar said.

A trader had offered Rs 21,000 for a single fruit, the orchardist claimed, adding that an internet search had revealed that one piece of this variety of mango was earlier sold at Rs 2.70 lakh.

Parihar said he has stepped up the security at the farm, after an attempt was made to steal the mangoes.

About five years ago, Parihar had brought 100 saplings of six mango varieties, unknown to him, from Chennai for Rs 2.5 lakh, and of these, 52 trees have survived.

"My intention is not to sell fruits of this rare variety, but to develop an orchard of them," he said.

Taiyo No Tamago (egg of the sun) is a special Japanese variety of mango, which is grown in a controlled environment in Japan, and is among the most expensive in the world.

The fruit is a dark red on the outside and has a fleshy deep yellow interior. These mangoes are rich in antioxidants, folic acid and beta-carotene.