Manjamma Jogathi is today known as Matha B Manjamma Jogathi, the transgender dancer who received Padma Shri for her contribution to art. Here's her journey so far. 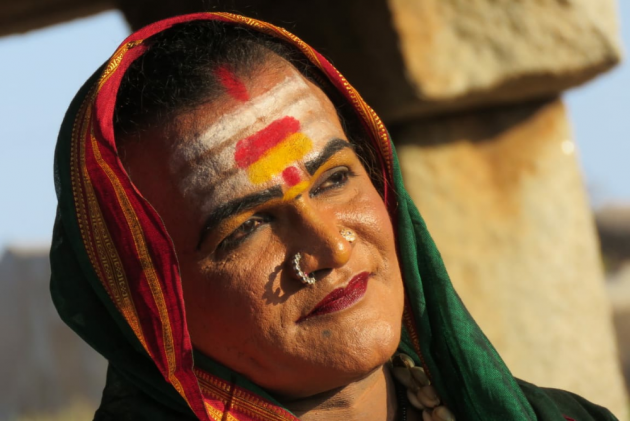 Born in Karnataka’s Ballari district, Manjunatha Shetty was uncomfortable being with boys and always found it comfortable to be among the girls. He started wearing girls’ attires when he was in Class 7. He used to do it in private, hiding the clothes from others. He was tall physically, but his body movement was different from that of other boys. It was then that his father found out that he is transgender.

In that locality, if a transgender was born, traditionally the family would give the child to God by performing a ritual called muttu kattodu. Manjunatha Shetty’s fate was not different. His udadaara— a thread the boys in Karnataka and in many parts of South India traditionally wear around their waist — was cut. Manjunatha Shetty became Manjamma Jogathi. His father gave him away to God.

Who Is Manjamma Jogathi, The Transgender Dancer Who Received Padma Shri 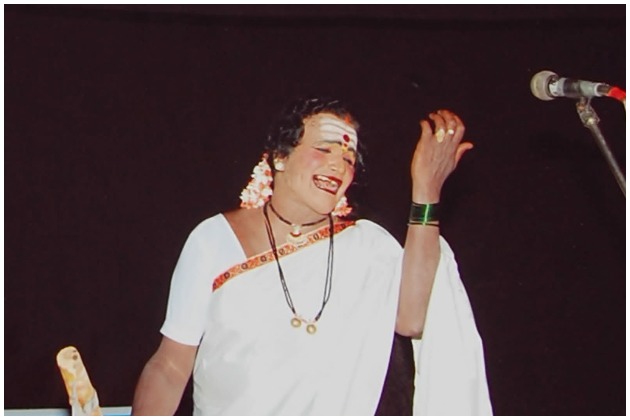 During the Padma awards ceremony, she walked on the red carpet of the Rashtrapati Bhavan wearing a red full-sleeve blouse and a violet saree with golden colour borders. Her head was adorned by jasmine garlands and her hands were decked with green bangles. She greeted President Ram Nath Kovind in her unique way and that went viral on social media instantly.

When, Manjamma received Padma Shri, it was a moment of pride for the trans community in the country.

Transgender people enjoyed a special status in the culture and tradition of India. Eunuchs played influential roles in the palaces of the erstwhile kings and emperors. In the battle of Mahabharata, a shikhandi was instrumental in the killing of Bhishma. However, trans persons in contemporary India live in fear and hostile conditions.

Manjamma started as a street beggar. She was sexually abused and was on the verge of suicide twice. From there, she emerged as a dancer. She popularized Jogathi Nritya, a folk-dance form of North Karnataka across the state, and even beyond and became the first transgender president of Karnataka Jaanapada Academy, a government body for performing arts.

“There were difficult times and it was a painful journey. But I chose to follow a path where my independence is maintained,” she tells me.

As Manjamma spoke in Kannada, her aide Vikram BK translated us to each other. At one point during my interview with her, she slipped into a monologue and exclaimed- “Am I the one who sold four idlis for one rupee to survive? Am I the one who paid five rupees for two used sarees? Am I the one who received Padma Shri from the Rashtrapati today?”

“When he realized I am neither a boy nor a girl, my father decided to do muttu kattodu on me,” she said, explaining, “Muttu kattodu is the ritual done by the priest by which one becomes a jogathi.”

When someone becomes a jogathi, his ‘udadaara’ will be cut by a senior jogathi, who then becomes the mother of the new jogathi. A jogathi ties mangalsutra on herself. There’s no husband. If somebody asks who her husband is, a jogathi normally says her husband is jamadagni, who is the husband of Renuka, who became the Goddess Renuka Ellamma, whom jogathies worship. 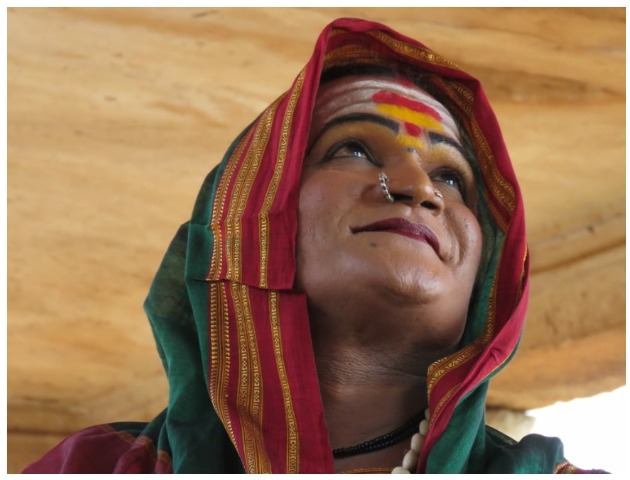 “When I was doing begging for my livelihood and started saving some money, some people came, stole my money and harassed me. That was the second time I thought of committing suicide. Since poison consumption was a failed attempt, this time I thought of going to the railway track thinking I won’t fail this time in my attempt to go away from this world. My dress was torn. There were a lot of scars made by the harassers on my body. I was sitting in my hut. I was totally devastated. I drank one mug of water, sat there and then fell asleep. The next day, I wanted to move out of it. I didn’t want to commit suicide, instead, I wanted to achieve something in my life.

“Instead of going around and begging, I wanted to uphold my self-esteem and went ahead and learned the art form from my Gurus,” she says. I never missed an opportunity. I ignored my sufferings and got completely immersed in the art form. I learned the art form and that art is holding me today. That journey- becoming an artist, learning the art and teaching the art- is giving me all the recognition though I never went after any awards or recognition. The Padma Shri award I received is for every trans person in India. It is for them. It is for every Kannadiga,” she says. 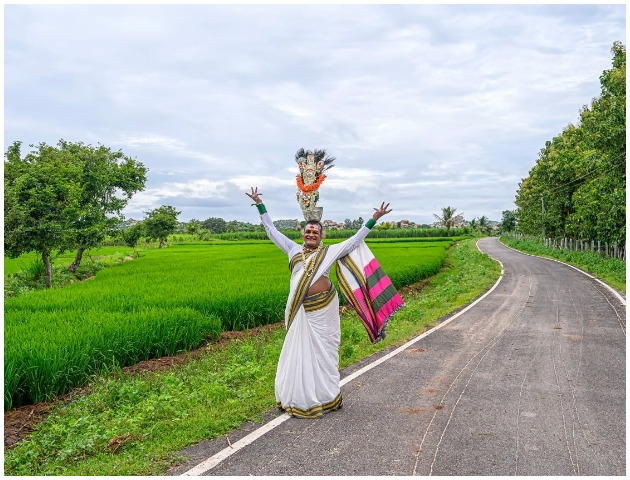 Meeting her Guru was the turning point in her life.

“I used to sell idlis during the daytime and give tuition classes to students in the evening. Many parents didn’t have money to pay me. So, they used to give me grains and vegetables. Some used to ask me to bless their children to get education. That was the time my Guru Kalavva Jogathi saw me when the Guru came to my village for a performance. The Guru asked me why was I doing so many things and suggested I join the team and learn the art form,” she said.

Since then, Manjamma has popularized the jogathi nritya across Karnataka and even beyond. She has now become an ambassador of the jogathi culture. “I can speak on and on about Renuka Ellamma. That’s precisely what we do in our songs, dances and plays. It’s a long story- her emotions, what she went through, her relationship with her husband. It will take an entire night to narrate Renuka Ellamma’s story,” she tells me. 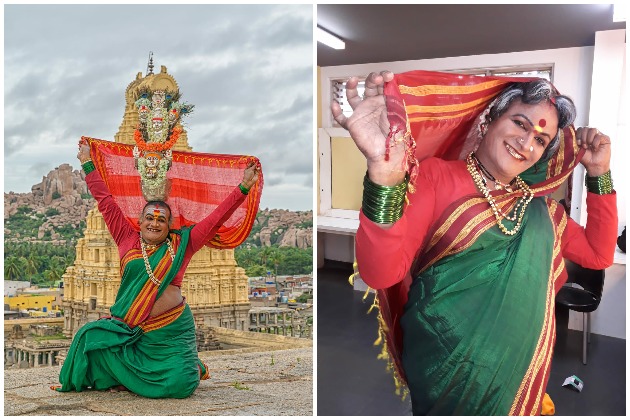 Nowadays, Manjamma says, she also finds persons from the hijra community worshipping Renuka Ellamma. According to her, some synchronization is happening between the jogathi and hijra communities.

“The root remains the same for Hijaras and Jogathies as both are transgenders. In Jogathi tradition there is the ritual called muttu kattodu that a jogathi person undergoes. Jogathies worship the Goddess Renuka Ellamma. They do begging and dancing for their livelihood. They do not engage in sex. Hijra community follow a guru-shishya tradition, most of them undergo sex change surgery and they also indulge in sex work. But, with changing time, some of the jogathies also undergo sex-change surgery. And some of the Hijaras have started worshipping Renuka Ellamma,” she says.

According to her, the situation of the transgender community in India is much better today when compared to the situation in the past. “Nobody used to give us any respect. We were treated as lesser human beings. I have faced it in buses nobody used to even sit beside us,” she tells me. 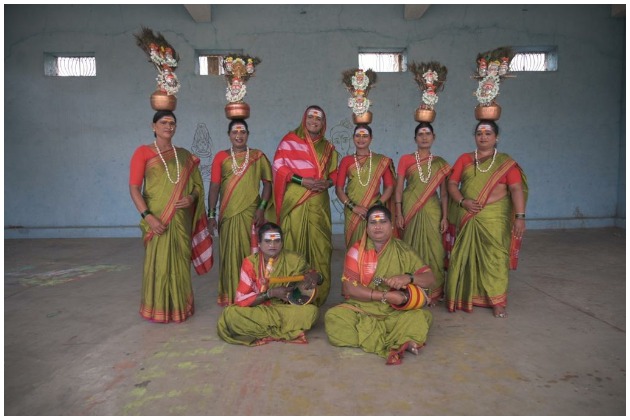 And then she has a message to the trans community, that is to get educated and uphold self-esteem. “Education is very important. Once you get educated you can achieve many things. If you like any art form, you should get trained in that and become a professional artist. That will help you carry your life with dignity. The government is giving one per cent reservation. You should be aware of it and make use of it,” she says.

“Munnuggi- march ahead- is my message to the trans community. But I also have a message to society in general. When a trans person is born into a family, please accept them. Give respect to them. Don’t leave them. When you realise your child is neither a boy nor a girl but a trans, why can’t that person have a place in your house? It is very important that the parents first accept and support such a child. If you abandon the child, you are committing a mistake to society. You are forcing them to get into begging and sex work. India is a free country today. As a parent, why do you want to restrict your own child? Don’t do that,” she concludes.