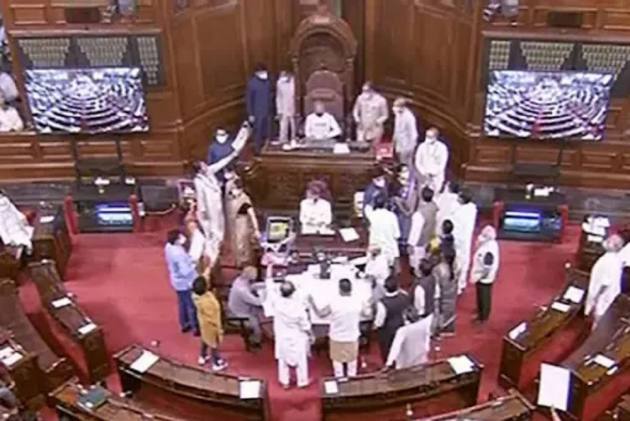 An internal interim report of Rajya Sabha security has revealed the details of the clashes in the House. It is learnt to have named some opposition MPs for allegedly indulging in unruly behaviour and clashing with the security personnel deputed there.

The two-page report comes after opposition MPs and marshals clashed with each other while the General Insurance Bill was being taken up in the Upper House.

The opposition MPs had created uproar as they wanted the bill to be referred to a select committee. The bill was passed amid din.

The security report also says that security personnel from the Rajya Sabha and Lok Sabha were deployed to protect the table staff and a cordon was made.

It says that one MP mahandled and "severely choked the neck of a male marshal and dragged him in order to break the security cordon".

It also says that one lady marshal was "pulled and dragged" by women MPs and assaulted in the Well of the House.

A video showing the melee in the Rajya Sabha with opposition MPs clashing with the marshals also went viral with both sides blaming each other.

Rajya Sabha chairman M Venkaiah Naidu held discussions with officials of the Upper House who told him that no outsiders were deployed as marshals inside the House.

Naidu has also sought a detailed report of the unruly events inside the House from the security staff.

TMC MP Derek O'Brien, however, alleged that the government is trying to defame the opposition to divert attention.

The opposition also alleged that its MPs, including women members, were manhandled by outsiders who were not part of parliament security during the ruckus.

The government has, however, maintained it was the other way round and alleged that a lady marshal was manhandled by opposition MPs.

The Vice President's Secretariat tweeted that the two expressed "deep concern" over the disruptive behaviour of some parliamentarians.

Parliament sources said both the presiding officers felt that these incidents have dented the dignity and stature of the highest legislature in the country.

They said the duo has decided to undertake a detailed examination of such unruly scenes in the past and action taken for deciding on the future course of action in such cases.