In a conversation with Outlook’s Midhat Fatimah, Maskoor Usmani talks about his candidature, the Opposition, media trials, and much more. 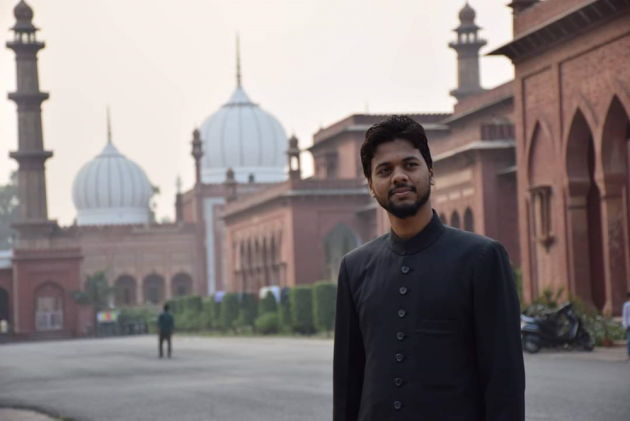 Maskoor Usmani, a Former Aligarh Muslim University Students' Union (AMUSU) President and Indian National Congress’s candidate contesting from Jale constituency in Darbhanga district, recently found himself at the centre of a political storm after BJP MP Giriraj Singh accused him of being a ‘Jinnah Sympathiser’. The Congress nominee is one of the youngest candidates contesting in the state of Bihar which is set to vote for a new government next week. In a conversation with Outlook’s Midhat Fatimah, he talks about his candidature, the Opposition, media trials, and the relentless attacks over the two-year-old incident involving Mohammad Ali Jinnah’s portrait. Excerpts:

Q) You have been active in politics and campaigned at the university level, how are you finding campaigning different now that you are contesting in state elections?

Q) Is there any difference in how you are treated by the opposition?

I am not seeing any opposition here in my constituency. I am contesting against BJP’s Jibesh Kumar Mishra who has served as an MLA twice but hasn’t done anything for the constituency. So, I am seeing a strong anti-incumbency wave against him. I am constantly questioning what he has done for the people of the constituency. An important aspect of democracy is that the public can ask questions. Often, the public thinks it can’t question its representative but I am telling people it is their right to ask questions. I am sort of training people to question because in a democracy elections are a time when one needs to gauge the calibre of their representative.

Q) It was your university which opened an avenue for you to enter mainstream politics. What do you have to say about the emerging narrative that wants to separate students from politics?

This is only the Bharatiya Janata Party’s narrative. Not all political parties adhere to this narrative. If that was the case, the Congress party would have not fielded me. By giving me a ticket, the Congress party has broken BJP’s narrative. Basically, BJP wants to uproot student activism. It doesn’t want students to get involved in politics because students ask questions and BJP finds being questioned the most problematic. Students fearlessly talk about the poverty-stricken, labour class, and farmers. So, BJP tries to undermine student politics. It’s a larger conspiracy which BJP has taken years to develop, it should not be underestimated. Actually, they fear an educated mind.

Q) Recently, a two-year-old incident involving a portrait of Mohammad Ali Jinnah in AMU library was raked up by BJP MP Giriraj Singh, who accused you of being a ‘Jinnah Sympathiser’. Will that impact your chances of winning the election?

It is just propaganda that I have already debunked. They (BJP) thought they will get successful in defaming me, however, I am really thankful to the Mahagathbandhan and especially my own party for clarifying the stand at a joint press conference, conducted for a single candidate, which is so rare. Back then, I had written to Prime Minister Narendra Modi as well as the then Home Minister Rajnath Singh and had asked them to remove Jinnah’s portrait from AMU as well as the Bombay High Court and Parliament, but I didn’t receive any reply. BJP had used the same propaganda during Kairana by-polls in UP and had lost badly. I want to remind the BJP that the public understands the truth and they should prepare for their second defeat.

Q) Rishi Mishra, a member of your party, has resigned after you were given a ticket to contest from Jale. What do you have to say about that?

He wanted Congress to field him but he just joined the party a few months ago. Congress is a party of ideology. Only a person of strong ideology can be a part of the Congress party. There are many cases where people switched to other parties. Congress isn’t for just getting in power or getting tickets, it is for people with strong ideology. If somebody’s ideology doesn’t align with Congress and they are denied tickets, such reactions are received. Personally, I don’t have any grudges against him. I too would have felt bad if I was denied a ticket, but it is no justification for making derogatory comments against the party. Only people coming from influential backgrounds are able to start their political careers as early as me. Now that people are seeing me, an ordinary farmer’s son entering politics they want to pull me down. They don’t have a problem with me, but with people coming from poor backgrounds.

Q) Congress has fielded 12 Muslim candidates among the 70 seats it is contesting in Bihar, the highest in the state. Given that majority appeasement is becoming the political trend, how will that impact the party’s chances?

I see it differently. I see that Congress is giving a chance to all those it deems fit to represent people. And more importantly, one should be represented according to their share in society. It is a welcome step and shouldn’t be seen as any kind of appeasement. It should be understood that if there won’t be anyone to represent the marginalised sections in the assembly then who would speak for them? Why else would reservation exist?

Q) After the Jinnah issue resurfaced, you wrote a letter to CM Nitish Kumar concerning your safety and said that NDA will be responsible if your safety was compromised. Why is it that you are concerned for your safety?

When news anchors yell on TV screens and say Maskoor Usmani is a terrorist, is a Jinnah sympathiser, then I become a villain for their viewers, who breed hatred against me. People who will consider me a villain because of media can attack me anytime. So, the kind of toxic campaign that was launched again me has put my life in danger. For three days straight, the media put me on a trial. There have been cases where because of media trials people have been attacked in broad daylight. So, to ensure my safety, I have written to the CM as well as the election commission. However, I have not received any reply. I have also sent legal notices to certain media houses that will be dealt with after the elections.