Meet Ranjitsinh Disale: A Teacher With A Golden Heart

Teachers' voice should be heard and amplified, says Global Teacher Prize recipient Ranjitsinh Disale, who shared 50 percent of his prize money among finalists 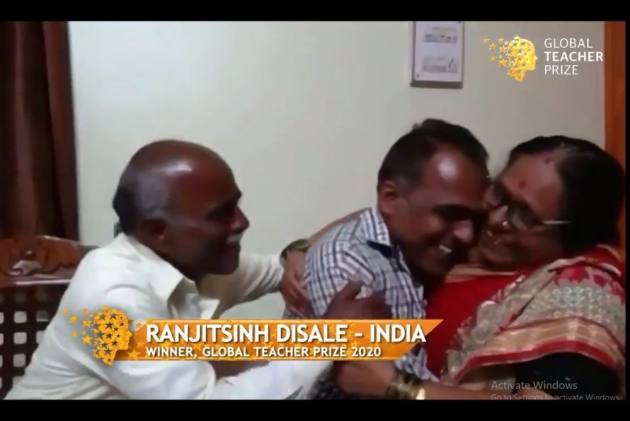 Ranjitsinh Disale left his engineering course midway because of bullying and ragging, but this did not break his faith in the education system. Instead, he chose to become a teacher to better it and bring a change in children's lives.

"I left engineering midway as I could not handle bullying and ragging. I have no regrets at all. I am lucky that I chose teaching and could bring change in students lives," said Disale, who beat 12,000 others from across the world for the award.

The Zilla Parishad primary school teacher from Paritewadi, a tiny village with less than 2,000 population in Maharashtra’s Solapur district, was recognised for his efforts to promote girls' education and trigger a quick-response (QR) coded textbook revolution in India.

He has announced that he would share 50 per cent of the prize money equally among his fellow finalists.

Speaking to PTI over phone from his home in Solapur, Disale said, "I am thankful to the Varkey Foundation and UNESCO for giving recognition to teachers in such a big way."

"Besides the prize money, there is huge prestige that is attached to this award. I feel proud to be the first Indian to receive it," he said.

Disale does not want to leave Paritewadi from where his quick-response (QR)-coded textbook revolution spread to the entire state, and then to the entire country.

"I am a teacher and I will be a teacher for my whole life now. I dedicate my award to all the teachers worldwide. I firmly believe that the government, all stakeholders and teachers should work in tandem to bring change in the education sector. If we all work together, we can get better results," he said.

"Teachers who are doing good work should be recognised so that they get motivated to do something different. Their voice should be heard, respected and amplified," Disale said.

There are many challenges in the education sector and these can be addressed if all the stakeholders work together, he said.

"Girls' education is a major issue. Dropout is another one. There are so many challenges in this sector. Teachers have solutions and ground level experience. I can say this on the basis of my personal experience. I shared my idea with the government (QR code revolution) and they implemented it and a major change was brought. I am hopeful that there are many like me who have new ideas which needs to be heard,” the Global Teacher Prize recipient said.

Asked about his decision to share the prize money with the runners-up of the contest, he said that it was pre-determined.

"When you apply for this award, you have to mention that how will you spend the money. So, it was a pre-decided thing, and I have not taken this decision spontaneously or in wake of an emotional outpour," Disale said.

Teachers work for outcome, not for income, and these teachers are doing tremendous work and they should also get the reward, he said.

"I want them to feel like winners and be equally happy," Disale said, adding that this was his second attempt for the award and the process got delayed due to the Covid-19 pandemic.

The process included interviews, an audit and verification by PWC and other agencies.

"I was rejected in my first attempt when one of my overseas friends nominated me. Then she told me to apply again. It was a lengthy process and took almost a year due to the pandemic. I have gone through interviews and showed my work in detail. I think it was my overall profile, not a single aspect that got me the award," he said.

This is not the first international recognition for Disale. He has earlier been recognised by Microsoft as the Microsoft Innovative Educator Expert, and also won the National Innovation Foundation’s Innovator of the Year Award in 2018.

Disale would also donate some of the prize money to establish a Teachers Innovation Fund, which will help teachers like him bring ideas for students.

Since winning the award, Disale’s name has been trending on social media and he has got congratulatory messages from celebrities including Amitabh Bachchan but he is most excited to celebrate the achievement with his students in Paritewadi.

“I am going to meet them on Sunday and will celebrate with them. I have already shared the news with them and they are too happy. Now I want to see the happiness on their face,” Disale said.