The relatives of the trapped miners are losing hope and are expecting a miracle to occur. 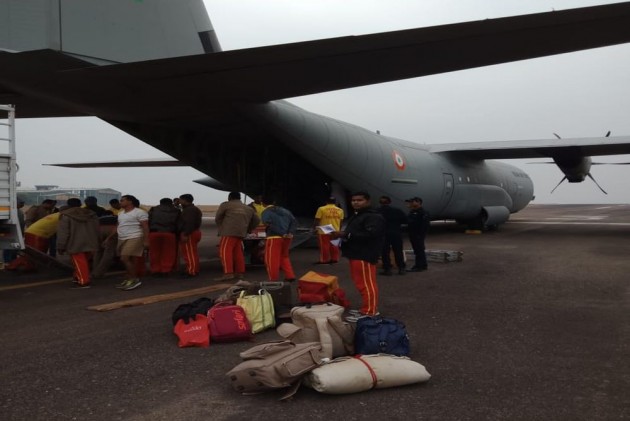 A heavy-lift transport plane of the Air Force carrying NDRF personnel and high-power pumps has taken off from Bhubaneswar to help in the process to rescue 15 miners trapped in Meghalaya for 15 days.

Low-capacity pumps used by the NDRF turned out ineffectual in extracting water from the collapsed mine in Meghalaya's East Jaintia Hills.

On Thursday, the officials said that the chances for their survival seem grim and that only 'God's grace can help them to be alive'.

"Only God's grace and some miracle can help them to be alive," Kyrmen Shylla, Meghalaya’s disaster management minister, told Reuters by telephone from capital Shillong.

According to a report by the  NDTV, the Meghalaya government has said that they are worried about the lives trapped inside the mine as the drivers at the rescue site have reported a foul smell coming from inside the mine.

However, NDRF officials said that they are still uncertain whether the foul smell is coming from the decomposed or from the stagnant water.

"We are not certain whether the foul smell is of decomposed bodies as it could be from stagnant water, which has not been pumped out for three days," NDTVquoted NDRF officials as saying.

The ministers accompanied by district police chief Sylvester Nongtnger also interacted with the rescuers besides family members of the trapped miners.

"We are expecting that the Coal India Limited (CIL) will airlift their water pumps to the accident site by tomorrow (Friday). Their (CIL) team of engineers and surveyors arrived in the state and meeting the government officials," Sangma told IANS.

"The main challenge that the state is facing now is how to get the logistics. Nonetheless, we are in touch with the central government and we have been assured of all their support," the Chief Minister said.

The district administration has temporarily suspended pumping of water from the coal pit since December 24.

NDRF rescuers team dived inside the main shaft of the coal pit but could not locate any of the miners.

"There is nothing in the main shaft of the coal pit. We have used all our equipment with us including SONAR to find out if any of the miners are trapped in the main shaft," Assistant Commandant NDRF, Santosh Kumar Singh, told IANS.

"There is no sign of receding or increasing of the water level (in the pit). We didn't even find anyone floating on the water surface. We have analysed the oxygen permissible on the surface of the water and the quality of the water. The water is stagnated for the last two three days," he said.

Asked if the rescuers have lost hope to evacuate the trapped miners over ground, Singh said, "Rescuers never lose hope. We are all putting our best efforts to rescue them. We are waiting for the desired pumps to be in place and the state government is doing its best with all its resources. Therefore, we are very hopeful."

However, the relatives of the trapped miners are losing hope and are expecting a miracle to occur.

"It has been fifteen days since December 13 when they got trapped inside the pit without air. If God is willing, they may come back alive," said Adil Hussain, who was camping at the mining site seeing the rescuers doing whatever they can to bring the miners out.