The largest mission of its kind in India, it seeks to help Meghalaya emerge as a pig breeding and processing hub. 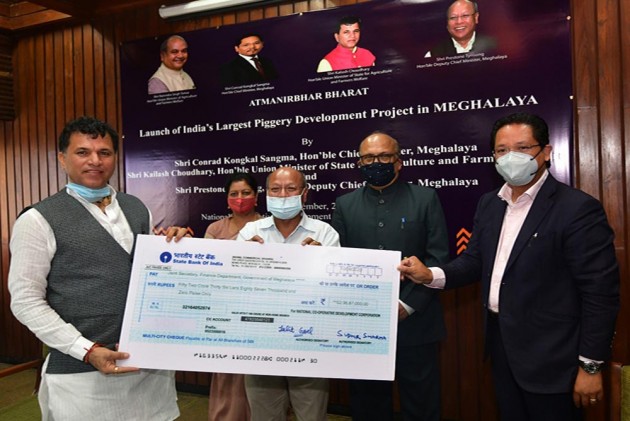 Announcing the launch of the mission in Delhi, Meghalaya Chief Minister Conrad K. Sangma said that the new mission to boost pork production in the state, is part of the vision unveiled on August 15 to boost economic growth, promote entrepreneurship, social sector development, infrastructure and rural development.

“This is not a standalone project but part of a bigger project to help farmers boost their income through greater focus on livestock breeding and creating infrastructure for marketing, cold storage and food processing,” said Sangma, while emphasizing on the multiplier effect such missions can cause.

Starting with the milk mission in 2018, the state has since launched the Lakadong turmeric mission, the jackfruit mission, the aquaculture mission, the mushroom mission and now the piggery mission.

The state received the first funding instalment of Rs. 52.36 Crore from the NCDC to kickstart the project, which is banking on subversion of interest or interest free loans to farmers for 8 years to make the project a success. The state is also looking to converge with government programmes like MGNREGA to help farmers set up piggery sheds in villages.

While speaking to Outlook, Sangma said that the state is looking for private sector participation including from that of Bangalore based DLG Farms to introduce better breeds of pigs in Meghalaya.

On the anvil, there are also plans to import Yorkshire breed of domestic pigs from the UK as Meghalaya’s climate is suitable for breeding them. Additionally, the feed conversion of the aforementioned breed is higher than most that of most domestic breeds. For instance, while most Indian breeds gain 0.7 kg weight on consumption of 1 kg feed, in the case of the Yorkshire breed the average weight gain is 1.4 kg.

Pork being a favourite of locals in the state, the annual consumption is around 41,000 metric tonnes, but it relies on supplies from other states to bridge the production gap, which is just 10,000 metric tonnes.

Meghalaya Deputy Chief Minister Prestone Tynsong, who also holds the Animal Husbandry and Veterinary portfolio, said that farmers can take advantage of the shortage in production by taking up piggery farming as a full time business.
“This will benefit farmers and consumers and will lead to rural development,” Tynsong said, adding that in the first year itself around 25,000 people are expected to benefit through the mission.

Tynsong emphasized that the investment of Rs. 220 Crore is expected to generate an approximate revenue of over Rs.600 Crore annually once it gets fully established over next 10-12 years. He also claimed that this mission would see the emergence of 20,000 new enterprises involved in various activities connected to the piggery/ pork trade.

Announcing the initiative as part of Aatma Nirbhar Bharat Abhiyan, Kailash Choudhary, Union Minister of State for Agriculture and Farmers' Welfare, said that it will not just be instrumental in boosting farmers’ income but will also help Meghalaya become self-sufficient in the production of pork.

Choudhary also said that plans are afoot to help set up around 10,000 farmer producer organisations (FPOs) connected to piggery.
Sandeep Naik, CMD of NCDC, said that “Meghalaya is best placed to emerge as the pig breeding and processing hub given that it has around 800 vets for 11 districts.” Naik is hopeful that the new mission will open more opportunities for the veterinarians given the scope of the pig breeding and fattening programme.