The miners have been trapped in the mine in the Ksan area of Lumthari village in Meghalaya's East Jaintia Hills district since December 13, after water from the nearby Lytein river gushed into it. 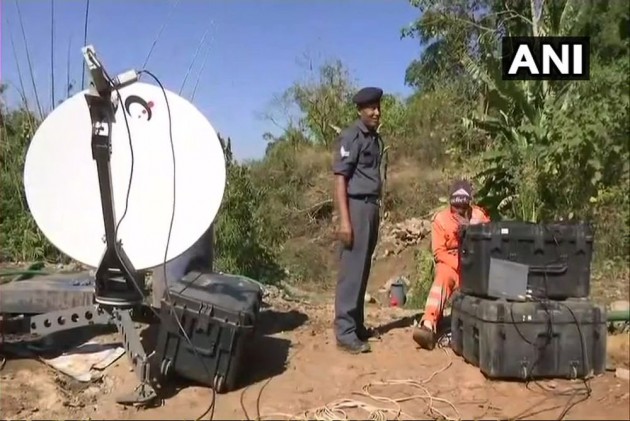 A team leader from the Indian Navy and NDRF personnel went inside a 370-foot-deep mine, where 15 miners are trapped, to ascertain the water level inside on Sunday afternoon, officials said.

The Navy divers and their equipment arrived at the site around 1.30 pm Sunday after which the Navy personnel started measuring the actual level of the water in the mine shaft.

SK Singh, Asst Commandant NDRF on miners trapped in East Jaintia Hills #Meghalaya: Some other agencies have joined us in the operation; Odisha Fire Services reached here with 10 high pressure pumps, a team of Navy divers has also reached here. I've briefed them of the situation. pic.twitter.com/dcj5sdeN09

The Navy wanted to ascertain the water level as their divers can operate up to 100 feet in a closed container-type situation, a district official said.

Nearly 200 rescuers from various agencies are stationed at the site. The Odisha Fire Service team had brought 10 high-powered pumps with them.

East Jaintia Hills district SP Sylvester Nongtynger said that at least two pumps will have to be lowered down to the water level inside the mine shaft to begin the operation.

Odisha Chief Fire Officer S Sethi said his team was tasked with pumping water out and they are ready for the job.

"Our only concern is that if we install the pumps now, the carbon exhaust may suffocate the entire mine shaft," Sethi said.

The remaining eight pumps will be placed at various locations identified in the area, he said.

One high-powered submersible pumps with an output capacity of 500 gallons per minute is arriving Sunday from CIL Ranchi, CIL Kolkata GM A K Bharali said.

Bharali, who arrived here four days ago, said that as soon as the generators and platforms are made available at the mine shaft, the pumping of water will begin.

Five more pumps from CIL Centres in Ranchi, Dhandbad and Asansol are on road and are expected to arrive anytime, he said.

A senior district official said a few pumps of Coal India Ltd have arrived in Guwahati and are expected to reach the site soon.

A team of 25 CIL personnel are at the site and survey teams are doing their job, Bharali said.

The miners have been trapped in the mine in the Ksan area of Lumthari village in Meghalaya's East Jaintia Hills district since December 13, after water from the nearby Lytein river gushed into it.

The National Disaster Response Force (NDRF) is coordinating the rescue operations with the help of Navy, the NDMA and Coal India Ltd.

"The Navy divers have reported that they have the capacity to go a depth of 100 feet, whereas the NDRF divers can go to a depth of 30 feet," East Jaintia Hills district SP Sylvester Nongtyngerthe said.