Mehbooba Came To Power By Stirring Anti-India Sentiments, Nobody Should Take Her Seriously: J&K Governor

In her latest statements, Mehbooba Mufti has been critical of the Governor and also Prime Minister Narendra Modi, accusing both of furthering a Hindutva agenda detrimental to "the soul and spirit of the country's democratic set-up". 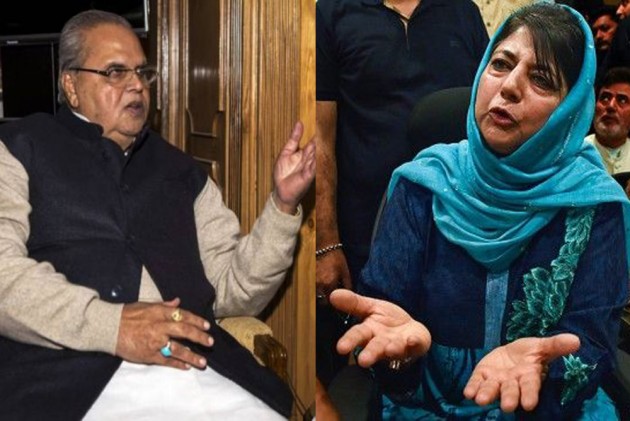 Malik's remarks come a day after Mufti demanded action against one Major Shukla, who allegedly tortured a Pulwama resident, Tauseef Wani, at the Shadimarg camp of the Army and threatened to kill him in an encounter.

"She doesn't need to be taken seriously. We will not allow the morale of the security forces to be affected by statements like that of Mehbooba Mufti," Mailk told reporters here.

"I stand by our forces. Wherever there are atrocities, we take action. In some such cases with regard to the police force, we are taking action and are transferring all of them (erring police personnel). But we still stand with our forces," he added.

Malik alleged that Mufti's demand was aimed at gaining public support ahead of the upcoming state assembly elections.

"It is the time of elections. Her party is breaking. She is in a bad state. (Previously also) she had come to power through this sort of support," he said.

"Instead of taking cognizance of the brutality that the young boy has been subjected to, and ordering action against the culprits, it is sad that the honourable governor is talking politics instead. Saddened to see the constitutional authorities taking sides so brazenly," she said in a tweet.

The PDP president said instead of accusing her party of demonising the Army, the governor should face the situation.

"So please let's call a spade a spade, instead of accusing us of demonising the Army. I have also spoken to the Corps Commander to take note of this incident," Mufti said.

"Governor Sb this is an unacceptable statement and an unnecessary interference in politics. At this rate it won't be long before people stop taking Raj Bhavan seriously. So please consider the office you occupy before you give statements," Abdullah tweeted.