'There are forces who want that Kashmiri youth should pick up a gun so that they will get more opportunity to suppress Kashmiris. I want to tell these youths don’t pick up guns,' Mehbooba Mufti said 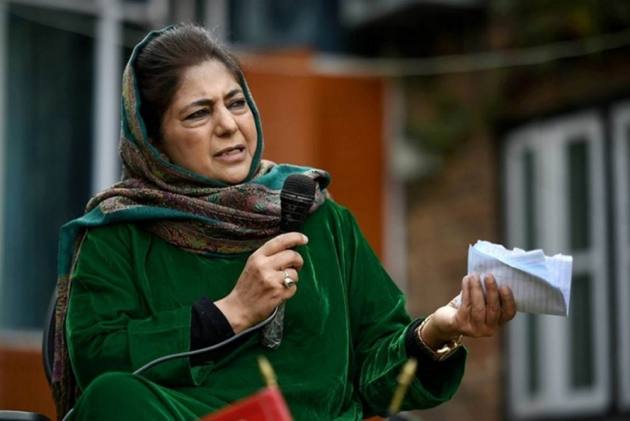 Raising the issue of alleged fake encounters in Kashmir, detentions, former Chief Minister Mehbooba Mufti today said she was committed to fighting for the rights of Kashmiris and the restoration of Articles 370, 35A.

She was addressing her party workers at the PDP’s 22nd foundation day today in Srinagar.

She said last year three youths of Rajouri were killed in a fake encounter in Shopian. She said there are other three incidents where youths have been killed in alleged fake encounters. “One of the families of youths wanted to meet me but they were not allowed yesterday,” she said.

She said the people are raising fingers at the police and sought an inquiry into the killings. She also emphasised that the youths shouldn’t pick up guns to become militants. “There are forces who want that Kashmiri youth should pick up a gun so that they will get more opportunity to suppress Kashmiris. I want to tell these youths don’t pick up guns. You are being killed and you are leaving your parents behind.”

“We (PDP) haven’t changed our stand. When we founded our party we called for resolution of the Kashmir issue and whenever we got the role whether we formed the government with Congress or the BJP, we made it the first condition that there should be talks with Pakistan and efforts to resolve the problem. We would always ask for the opening of the cross-LoC roads.”

“In fact in the Prime Minister’s meeting, I raised the issue of booking two sons of Hurriyat leader Mohammad Ashraf Sehari. In Sehari’s funeral, someone raised slogans and they took away his two sons and booked them,” she added.

Castigating BJP for what she called bulldozing the democratic ethos and institutions of the country, Mehbooba equated the present-day style of functioning of the BJP government with the erstwhile East India Company which only bothered about land and resources and not the people and their aspirations. “For BJP like East India Company every citizen of the country is a suspect and guilty until proven innocent,” she said referring to spying phones through Pegasus.

She said Jammu and Kashmir was the only Muslim majority state in the country that was bifurcated and dismembered. She said the BJP has sacrificed Jammu and Kashmir for its vote bank. She said her party would continue to struggle for the resolution of the Kashmir issue and restoration of Articles 370 and 35A. She also blamed the separatists for missing opportunities and closing doors for the dialogue. She said when the parliamentary delegation visited the Hurriyat Conference leader in 2016 they closed the doors. “I am not saying it could have solved the issue but it would have opened opportunities for dialogue,” she said.

Strongly pushing for the opening of the Cross-LoC roads, she said the government should start a dialogue with Pakistan and open the cross-LoC roads between the Srinagar-Muzaffarabad Road for trade. “Why will not you do it? You are talking every day with China. That China which has occupied our land,” Mehbooba said.

She said it took the BJP 70 years to abrogate Article 370, “it will take us 70 months to restore it but we will make it happen. “Don’t lose faith. We have to fight peacefully,” she said.