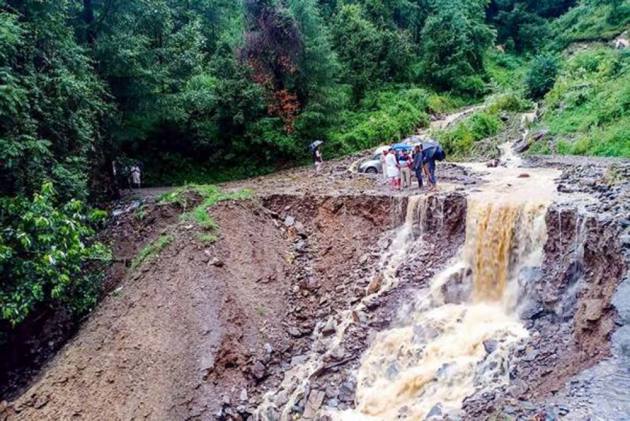 As landslides wreak havoc in Himachal Pradesh, the Shimla MeT Centre has predicted more bad weather and heavy rains in the state till August 3. According to officials, the MeT department issued yellow alert in the hill state on Friday as it advised locals and tourists to stay away from water bodies.

Warning against a sudden rise in the water levels, the MeT department said that more landslides and uprooting of trees may occur in the coming days.

While the yellow alert has been issued till August 3, officials said that heavy rains are likely to occur in the plains and low and mid hills of the state till August 5.

The Met department issues colour-coded warnings to alert the public ahead of severe or hazardous weather, with 'yellow' indicating least danger.

On Friday, several places in the state received moderate to heavy rains.

Meanwhile, a terrifying video has emerged on social media in which a road going up to the hills can be seen collapsing into the chasm in Himachal Pradesh's Sirmaur district.

The Paonta Sahib-Shillai national highway 707 was closed for vehicular traffic after about a 100 metre stretch of the road caved near kali Dhank Badwas following heavy downpour for the last three days in Sirmaur district.

Meanwhile, at least 204 people including locals and tourists are stranded in different locations across the Lahaul-Spiti district, the Himachal Pradesh Disaster Management Authority said on Friday.

The government has issued an advisory for tourists and locals to refrain from high mountains, wandering near rivers and other places vulnerable to landslides.