Miss Universe 2021: Who Is Harnaaz Sandhu Who Brought Home The Crown After 21 Years

21-year-old Harnaaz Sandhu from Chandigarh has won several beauty pageants in India before becoming the third Indian woman to win the title of Miss Universe. 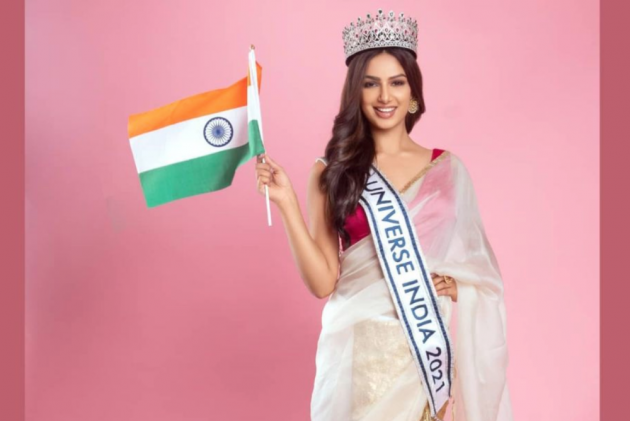 21 years after India won the Miss Universe international beauty pageant, Indian actor-model Harnaaz Sandhu made history on Monday after she was crowned Miss Universe 2021. Sandhu was the third Indian to win the celebrated title and beat contestants from 79 countries to become the reigning beauty queen of the universe.

Who is Harnaaz Sandhu?

Sandhu is a Chandigarh-based model, pursuing her master's degree in public administration. Sandhu is the daughter of  Pritam Singh Sandhu and mother Dr Ravinder Kaur Sandhu. She also has a brother, Harnoor Singh, all of whom were were elated about the victory.

Having finished her schooling as well as higher education in Chandigarh's Post Graduate Government College itself, Sandhu was reported a "bright" and "sincere" student. She is also passionate about women's empowerment and climate change.

In her previous interviews, Sandhu has said that she sees beauty pageants as a way for women to come forward and forge sisterhoods. She has also stressed the importance of being true to self over make-up in order to win beauty awards.

A long-time fan of actor and former Miss World Priyanka Chopra, Sandhu has been part of the film and entertainment industry for some time. She has appeared in films like Yaara Diyan Poo Baran and Bai Ji Kuttange.

This is not the first beauty award for Sandhu who has been participating in beauty pageants from her teenage years. She has already won the Miss Chandigarh 2017 award as well as the title of 'Miss Max Emerging Star India 2018'. In 2019, Sandhu won the Femina Miss India Punjab title, before going on to compete in the Femina Miss India.

Sandhu's mother is a gynaecologist. Apart from pageantry, Sandhu has several other interests. The actor-model loves yoga, horse riding and cooking and according to reports, her favourite dish to eat is her mother's homemade 'makki ki roti'.

She is an environmentalist and has spoken previously about global warming and climate change. During the final question and answer round, when she was asked if global warming was a "hoax", Sandhu said that her "heart breaks" to witness the damage being caused to nature "due to our irresponsible behaviour".

"I feel that this is the time to take actions and talk less because every action of ours can either kill or save nature. To prevent and protect is better than to repent and repair and this is what I would like to convince you today".

The 70th MISS UNIVERSE Competition is airing LIVE around the world from Eilat, Israel on @foxtv pic.twitter.com/wwyMhsAyvd

Sandhu's advice to the youth and women

According to Sandhu, one of the biggest challenges youth today faced to be able to be true to themselves and believing in themselves. She wanted the youth, especially women, to know that they are unique. She also said that the young should stop comparing themselves to others and think about issues that have importance across the world.

"I would tell young women to believe in themselves, to know that you are unique and beautiful. Stop comparing yourself with others and let's focus on the more important things happening across the world. Come out, speak for yourselves because you are the leader of your life. I believed in myself, and that's why I am standing here today" she said.

The model-actor and Bollywood aspirant also said before leaving for the pageant that she wanted to improve India-Israel ties. The 70th edition of the event was held in Eilat, Israel, where the 21-year-old bagged the coveted pageant.