Bhupender Yadav has succeeded senior BJP leader and eight-time member of Lok Sabha Santosh Kumar Gangwar who was holding charge of the ministry as Minister of State (Independent Charge). 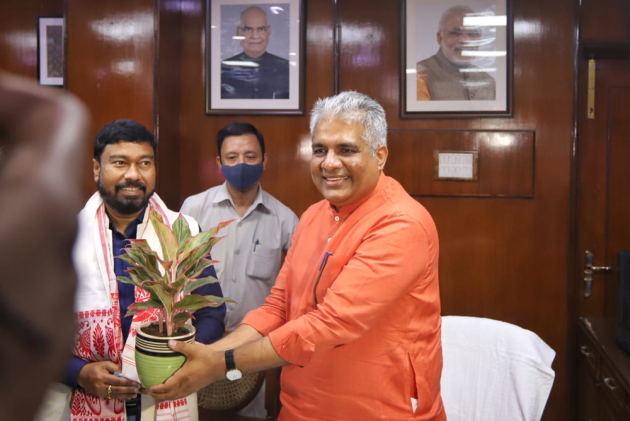 A day after the Cabinet reshuffle, BJP Rajya Sabha member Bhupender Yadav on Thursday took charge of Ministry of Labour and Employment as Union Cabinet Minister.

He has succeeded senior BJP leader and eight-time member of Lok Sabha Santosh Kumar Gangwar who was holding charge of the ministry as Minister of State (Independent Charge).

Besides, Lok Sabha member Rameswar Teli took over as Minister of State for Labour and Employment.

"I thank you all and today I am taking charge of this ministry along with my colleague Rameswar Teli," Yadav said.

However, Teli told PTI that he would be able to handle labour issues efficiently because he was himself a union worker and understands the plight of labourers.

The labour ministry is grappling with many issues like delay in implementation of four codes which were passed by Parliament last year and setting up a portal for unorganised workers' registration.

There has been migrant workers' exodus during the pandemic and the registration of informal sector workers with the government is required to provide them relief in such crisis.

Now, Yadav would have to handle these challenges in the ministry in the coming days. Yadav has long been the go-to person for the BJP top brass for handling a variety of challenges and issues, ranging from assembly polls and organisation matters in important states to directing the party's views in a number of parliamentary committees.

His entry in the Modi government as a Cabinet minister is seen as his just reward after serving as a party office-bearer for the longest term among all current occupants.

The 52-year-old second-term Rajya Sabha MP enjoys the image of a sober and non-controversial politician who deftly handles the issues on hand without drawing any negative attention, a trait which has acquainted him well with various party presidents from Nitin Gadkari to Amit Shah and J P Nadda.

Yadav was considered a trusted general secretary of Shah, when he was the party president, and has been in charge of the BJP's affairs in Bihar and Gujarat, the home state of Prime Minister Narendra Modi and Shah.

He has also been part of the party's brain to strategise for important state assembly polls and was often dubbed as the "committee man", as he once chaired around eight select committees and successfully persuaded all parties in building a consensus on many contentious bills.

From drafting resolutions at key party meetings to shaping its stand on legal challenges and presenting its views before the Election Commission, Yadav has always been the leader in the thick of things.

These included the GST Bill, Mines and Minerals Bill and Enemy Property Bill. The BJP general secretary was also the chairman of the Joint Committee on Insolvency and Bankruptcy Code, 2015.

Hailing from Rajasthan and a lawyer by profession, Yadav had been associated with the Akhil Bharatiya Adhivakta Parishad, a lawyers' body affiliated to the RSS, and rose through the ranks.