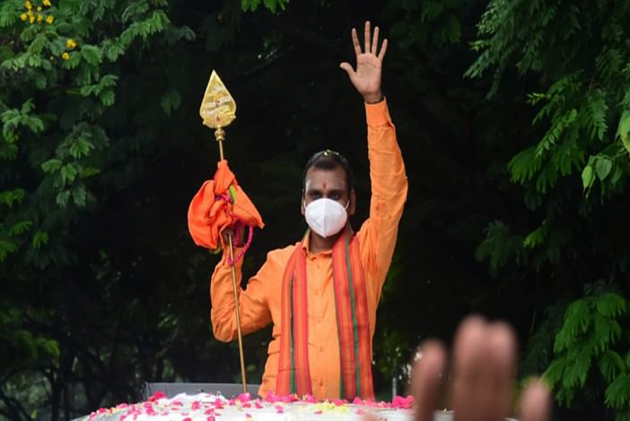 Tamil Nadu finally got a representation in the Union Government with the swearing in of state BJP president L. Murugan on Wednesday. The biggest loser, however, was the BJP’s staunch ally -- the AIADMK-- as none of its representatives figured in today’s Ministerial list.

The most disappointed AIADMK leader would be former Deputy CM O. Panneerselvam since he was fervently hoping that his son O.P. Ravidranath, the lone Lok Sabha MP from the AIADMK front, would be made a Minister of State.

O. Panneerselvam, who is the coordinator of the AIADMK, issued a statement affirming his party’s faith in the leadership of Narendra Modi. “Considering the interest of the nation and the welfare of Tamil Nadu, the AIADMK-BJP alliance will continue and there is no second opinion on this,” he had asserted.

Panneerselvam’s observation came as a retort to former Law Minister C.V Shanmugam who had blamed the alliance with the BJP as the reason for the AIADMK’s defeat in the recent Assembly elections. Shanmugam had, during a party meeting, alleged that the AIADMK lost the minority votes due to its alliance with the BJP. However, OPS was quick to refute that line to state that the alliance with the BJP remained intact and would continue. Despite that assertion by OPS, the non-inclusion of his son or any AIADMK Rajya Sabha MP in the Central ministry would rankle the AIADMK. The party has not had a union minister since it walked out of the Vajpayee-led NDA government in 1999. In 2014 though it had won 37 of the 39 Lok Sabha seats, Modi, in his first term, did not need the AIADMK's support as the BJP had a comfortable majority.

The BJP has, however, rewarded its Tamil Nadu state president L. Murugan for having helped the party re-enter the state Assembly with four MLAs after nearly twenty years. Murugan himself lost narrowly to the DMK candidate in the Dharapuram constituency. The BJP had contested twenty seats as part of the AIADMK led front. The 44-year-old lawyer belongs to the very backward Arunthadhiyar sub-sect of Scheduled Caste and was a surprise choice to lead the state unit. His elevation is also aimed at undoing the image that the BJP was dominated by forwarding communities.

Murugan had successfully spearheaded the BJP’s Vel yatra in the state after a rationalist outfit had demeaned “Kanda Sashti Kavasam” a Tamil hymn in praise of Lord Muruga. The BJP leadership now has to accommodate Murugan in the Rajya Sabha from some other state, since all the three present vacancies from Tamil Nadu will be taken by the DMK. And it also needs to find a new state chief for Tamil Nadu.