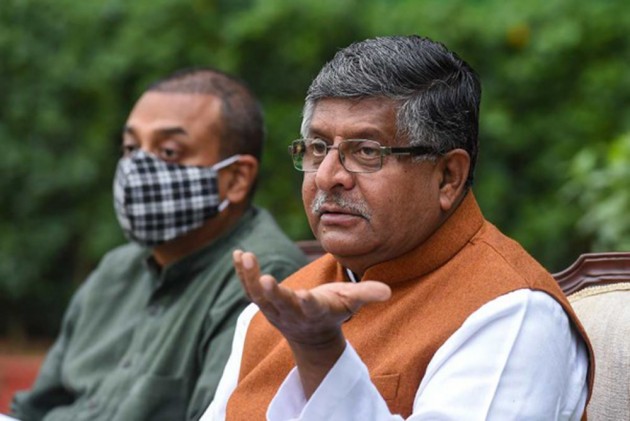 Prasad, who is a Union minister for law and justice, made the assertion while launching Bihar BJPs state-wide "Kisan Chaupal Sammelan" (farmers’ conference) in support of the three agricultural Acts at Tekbigha village in Bakhtiarpur Assembly constituency of Patna district.

"They (those protesting farm laws) are saying that they will not withdraw their movement unless and until these laws are withdrawn. We would like to say that the Narendra Modi government respects farmers but would like to make it clear that stern action will be taken against ‘tukde tukde gang’ taking advantage of farmers movement," Prasad said.

All Farm Union Heads To Observe Hunger Strike On Monday

"I want to ask who are these people who are talking the language of breaking the country...Now demands are being raised to free those so-called intellectuals who are in jails for indulging in rioting in Delhi and Maharashtra.

“Police have filed chargesheets, they are not able to obtain bail from the court as trials are under way. Now these people have taken refuge under farmers movement for their interest but we will not allow them to succeed in their goal," Prasad said while addressing the meeting.

Union agriculture minister Narendra Singh Tomar has also earlier asked protesting farmers to be vigilant against misuse of their platform by the "anti-social" as well as the "Leftist and Maoist" elements conspiring to spoil the atmosphere. He had said this on Friday after photographs of some protesters at the Tikri border seen holding posters demanding release of activists arrested under various charges had gone viral.

Food, railway and consumer affairs minister Piyush Goyal has been more direct in his charge, alleging that certain Leftist and Maoist elements seem to have taken "control" of the agitation and rather than discussing on farmer issues, they seem to be having some other agenda.

According to the Bihar BJP's programme, similar conferences will be held at the district level and chaupals (meetings) in every Assembly constituency till December 25, the birth anniversary of former Prime Minister Atal Bihari Vajpayee.

The pro-agri Acts meetings across Bihar will be attended by various union and state ministers.

The conference was also attended by Bihar BJP president and MP Sanjay Jaiswal, MLAs Gyanendra Singh Gyanu, Sanjeev Chaurasia and a host of other leaders.

Farmers are protesting against the Farmers (Empowerment and Protection) Agreement of Price Assurance and Farm Services Act, 2020; Farmers Produce Trade and Commerce (Promotion and Facilitation) Act, 2020 and The Essential Commodities (Amendment) Act, 2020.

Enacted in September, the three farm laws have been projected by the government as major reforms in the agriculture sector that will remove middlemen and allow farmers to sell anywhere in the country.

The protesting farmers have expressed apprehension that the new laws would pave the way for eliminating the safety cushion of minimum support price and do away with the mandis, leaving them at the mercy of the big corporates.

The Centre has maintained that MSP and Mandi mechanisms will stay.

Prasad asserted that the three agri laws have been enacted to benefit farmers especially small and marginal ones across the country and wondered as why the Opposition parties and farmers of Punjab are agitating against the laws which will free the farmers from shackles of Mandi system as they can sell their produce anywhere in the country.

“The laws give the farmers opportunity to sell their produce either in Mandi or in PACS or outside the realm of mandi, PACS or Vyapar Mandal...I just want to ask whether or not farmers be given such freedom or opportunity. It is beyond one’s fathom as they are opposing the laws," he said.

The minister cited examples of farmers of Kishanganj and Aurangabad in Bihar making good money by selling one lakh MT of pineapples and 200 MT of strawberries to the traders from Kolkata, respectively.

"Why makhana (gorgon nut) of north Bihar be sold locally and why should not it be given the access to global market?" he asked.

As per the farm law, those entering into agreements with farmers can neither sell nor lease out or mortgage the land of farmers, Prasad asserted while adding that companies (entering into agreement) will provide quality seeds, technique to farmers, buy their produce and finally farmers getting money sitting at home.

If any company was found indulge in irregularities with farmers or harassing them, then both the Narendra Modi government at Centre and Nitish Kumar government in Bihar, which are firmly standing behind farmers, will send such erring person to jail, the minister said.

Speaking on the occasion, Jaiswal said that there is a "conspiracy" behind the farmers’ movement which is hugely participated by cultivators of Punjab alone. “This conspiracy needs to be exposed,” he added.