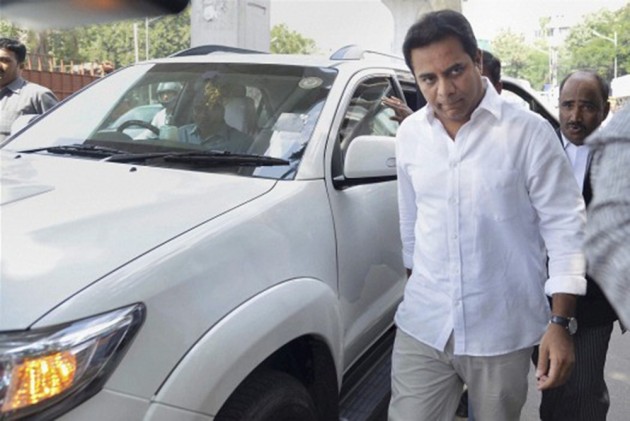 Telangana IT minister and TRS working president K T Rama Rao (KTR) on Sunday took exception to Chief Minister K Chandrasekhar Rao not being invited to receive Prime Minister Narendra Modi when the latter visited Hyderabad on Saturday. In this regard, KTR said the prime minister and chief ministers were not individuals but institutions, and they need show mutual respect.

"In any state there are some protocols. If they are followed it is good for the system. Whether it is CM KCR or whoever the CM is or whoever the PM is, there has to be mutual respect between different institutions. It is good for the nation. CM (KCR) should have been invited. When he was ready to go and welcome the honourable Prime Minister, what is the harm in it. He did not lose any respect. It is they who lost their respect," KTR said.

The prime minister on Saturday, as part of his three-city tour visited Hyderabad to take the stock of Covid-19 vaccine development situation and he visited a facility of Bharat Biotech located at Genome valley in the city and reviewed the progress of Covaxin, a Covid-19 vaccine candidate being developed by the company.

KTR said Modi's visit to the facility reaffirms and endorses the fact that Hyderabad is becoming a vaccine capital and he urged Modi to ensure that the Centre helps the vaccine industry by granting firms expeditious regulatory clearances.

"Let me also thank him (Modi) because it (Modi’s visit) indirectly indicates that the Telangana government has supported the expansion of life sciences ecosystem in Hyderabad. His visit itself is a testimony that good work is being done here," KTR said.

Replying to a query, the minister also said that though he does not want to "belittle" the PM by saying that he (Modi) harboured other intentions during his visit, KTR said the PM’s trip to the city can also be seen through a political lens.

He said the TRS party earlier supported the NDA government on some issues in Parliament and at the same time opposed certain policies. KTR asserted that the party will continue to do so in the future as well.

Regarding the Greater Hyderabad Municipal Corporation (GHMC) polls, KTR exuded confidence that his party will emerge victorious with an absolute majority without having to depend on ex-officio votes to get the mayor post.