The agency had summoned Khadse to depose and record his statement after it arrested his son-in-law Girish Chaudhari on Wednesday in this case that is linked to a 2016 instance of an alleged government land grab case in Pune. 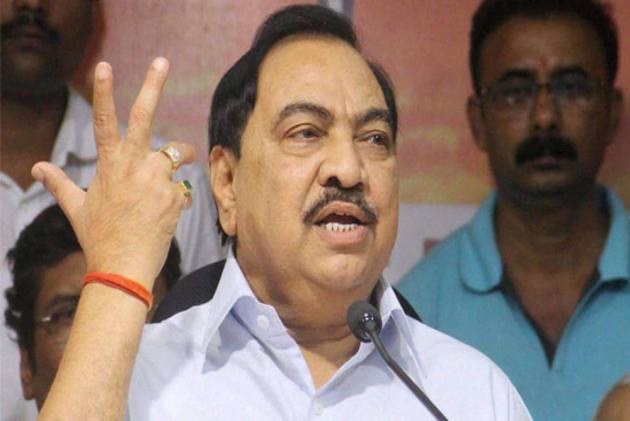 A day after his son-in-law was arrested by the federal agency, Former Maharashtra revenue minister and NCP leader Eknath Khadse also appeared before the Enforcement Directorate in Mumbai in a money laundering case investigation.

Khadse, 68, said that the probe in the case is "politically motivated".

"I will cooperate with the agency...today also I have come for the same. This is a politically motivated case and entire Maharashtra and the country is seeing this."

"Enquiry has been done five times in this case. How many times will they do it?" he said.

The agency had summoned Khadse to depose and record his statement after it arrested his son-in-law Girish Chaudhari on Wednesday in this case that is linked to a 2016 instance of an alleged government land grab case in Pune.

The Nationalist Congress Party (NCP) leader who left the BJP to join the Sharad Pawar-led party last year has been once questioned by the ED in this case in January this year.

The ED case stems from a Pune police anti-corruption bureau (ACB) FIR filed against Khadse, his wife Mandakini and Chaudhari in April 2017.

The agency claimed that alleged irregularities in the land deal caused a loss of Rs 61.25 crore to the exchequer "by fraudulently entering into a sale deed".

The plot, owned by state-run MIDC, under the scanner is located in the Haveli Taluka of Bhosari, a suburb of Pune district and it bears the survey no 52/2A/2.

The ED had issued a statement on Wednesday to describe the alleged role of Chaudhari in the deal, saying "with the connivance of others, he knowingly entered into a sale deed to acquire the said land despite the land belonging to the Maharashtra Industrial Development Corporation (MIDC) to avail a compensation more than 2.5-3 times of the actual value of land".

"The land was registered at a much lower rate of only Rs 3.75 crore against the prevailing value of Rs 31 crore," it had claimed.

The ED said the probe found that the accused "claimed the source of fund to purchase the said property as loan from some companies".

"However, it is revealed that these funds were layered and routed through shell companies, which are either dysfunctional or struck off (from the government record books) later on," it alleged.

Khadse, the then state revenue minister, had resigned from the former chief minister Devendra Fadnavis-led Maharashtra cabinet in 2016 after facing allegations regarding the same land deal and some other issues.

It was alleged that he misused his official powers to facilitate this deal.

Khadse had denied any wrongdoing saying that the state police ACB as well as the Income Tax Department had given him a clean chit in the matter.