Monsoon Yet Again Fails To Keep Its Date With Delhi, Causes Delay In Sowing Of Crops

If everything goes well, the monsoon is now expected to hit the national capital by July 12. 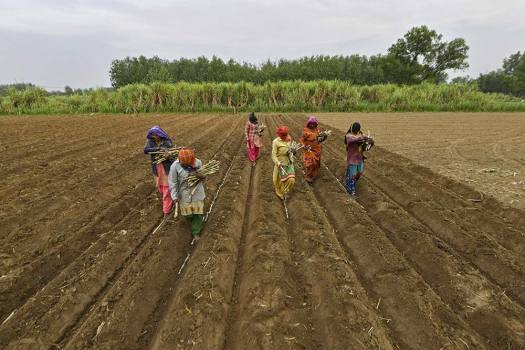 The southwest monsoon, which has covered most parts of the country, on Sunday yet again failed to keep its date with Delhi and most parts of the northwest region. Besides the resulting sweltering weather, farmers in many parts of Punjab, Haryana, Rajasthan and western Uttar Pradesh are still waiting or having to rely on groundwater to begin sowing their choice of crops. Among the grains, rice is the main crop sown during this season.

The IMD has forecast that the summer monsoon over the country is likely to be normal (94 to 106 percent of Long Period Average) in July in most parts of south peninsular, central, east and northeast India but below normal in many parts of northwest region.

By June 19, monsoon covered most parts of the country except parts of northwest India, including Haryana, Delhi, Punjab, parts of Uttar Pradesh and Rajasthan. But from June 26, monsoon flow started weakening, leading to its failure to deliver in the northwest region. If everything goes well, the monsoon is now expected to hit the capital by July 12.

July rains are crucial for the crops as it accounts for most of the rainfall during the four-month monsoon season beginning from June.  The summer monsoon, which accounts for 80 percent of the rains in the country, is also crucial for recharge of reservoirs and groundwater.

The National Forecasting Centre of IMD in its bulletin has forecast active monsoon conditions from July 14 to July 16 over the country. Fairly widespread to widespread rainfall with isolated heavy to very heavy falls is forecast over Central & Northwest India and along the West coast and adjoining peninsular India; scattered to fairly widespread rainfall over remaining parts of the country except over West Rajasthan, Jharkhand and Tamil Nadu, Puducherry and Karaikal where isolated to scattered rainfall is likely.

The crop sowing is normally in full swing this time, but in many cases where irrigation facilities are scarce, farmers are still waiting for the rains. “The delay in sowing may lead farmers to look at alternate crops and can also result in lower production,” says Pushpendra Singh, president, Kisan Shakti Sangh.

According to the Ministry of Agriculture & Farmers' Welfare till June 26, the total sown area was 20.2 million hectares, a 21 percent dip compared to 25.8 million hectares sown during the corresponding period last year. The shortfall in rice sowing was around 11 percent and 15 percent in the case of other grains like jowar and bajra. Sowing of pulses and cotton was also lower than in the corresponding period last year. Though the farmers still have time to complete sowing of kharif crops, they may have to change crop selection or go in for short duration crops if the monsoon arrival is further delayed.