On Tuesday, leaders of Opposition scheduled a strategy meeting at the Parliament House with a view to discussing the matter ahead of the session. 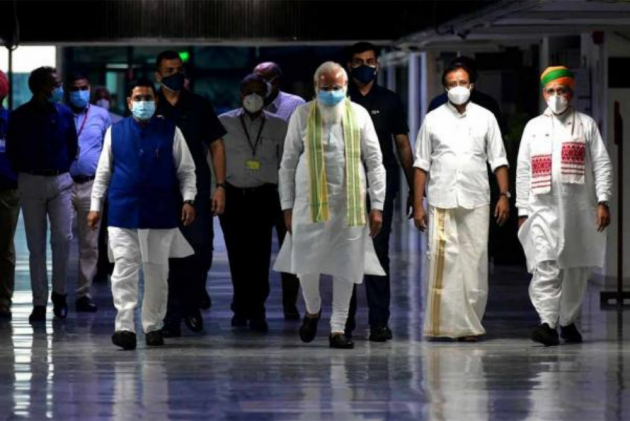 The Monsoon Session of Parliament began with a stormy first session on Monday that saw Opposition leaders disrupting Prime Minister Narendra Modi from introducing his new Council of Ministers. On the second day, proceedings are likely to be overshadowed with the Pegasus snooping list issue which has riled the government of India ahead of the session.

On Tuesday, leaders of Opposition have reportedly scheduled a strategy meeting at the Parliament House with a view to discussing the matter ahead of the session.

Congress leader Rahul Gandhi, election strategist Prashant Kishor and Union IT Minister Ashwini Vaishnaw are among the top targets of Israeli spyware 'Pegasus', The Wire, in its second set of explosive revelations said.

On Sunday, The Wire as part of an investigation has revealed that at least 40 Indian journalists from across media houses were on a list of potential targets for surveillance, carried out through a systematic hacking of their devices using the controversial Israeli spyware Pegasus. In a detailed report, it also added that forensic tests confirmed that a number of the potential victims had indeed been spied upon by unidentified sources via the Pegasus app.

The allegation of deploying Israeli spyware Pegasus for 'snooping' took shape of a massive political row in Parliament and outside. Various opposition parties appealed for a meticulous investigation and sacking of Home Minister Amit Shah, while the central government still denying its involvement in the controversy.

The Congress condemned the Centre for "treason" and held Shah responsible for the entire ordeal involving snooping and hacking of phones of journalists, judges and politicians. They demanded a probe questioning the "role of the prime minister" in the entire matter as well.

The demand for a probe came from opposition parties, including the Congress, TMC, NCP, Left parties, RJD and Shiv Sena.

The BJP hit back at the Congress and claimed "there is not a shred of evidence" to link either the ruling party or the Modi dispensation with the matter.