On Tuesday, leaders of Opposition have reportedly scheduled a strategy meeting at the Parliament House with a view to discussing the matter ahead of the session. 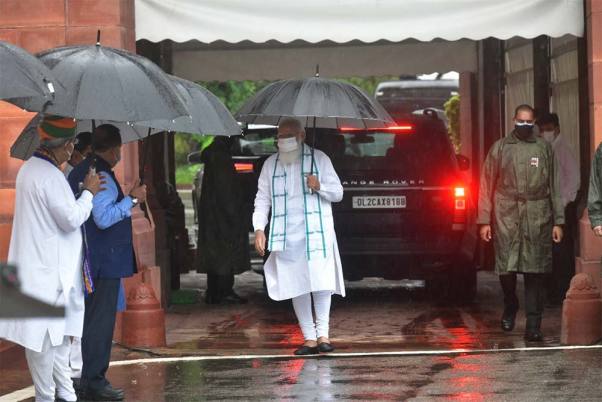 Leader of Opposition Mallikarjun Kharge on Tuesday attacked the ruling BJP government in Rajya Sabha during the Monsoon Session on Tuesday. Paying tribute to Covids-19 warriors, Kharge said that the government had ignored the problems faced by the people.

When the Upper House reconvened at 1 PM after two adjournments, YSR Congress members led by V Vijaysai Reddy trooped in the well, shouting slogans, "We want justice. We want the special status to Andhra Pradesh."

Earlier, Prime Minister Narendra Modi has allegedly slammed Congress leaders during the Opposition's parliamentary meeting on Tuesday. Slamming the Congress, the PM said that the negative publicity of the government done by the opposition is sad.  Meanwhile, Lok Sabha proceedings had been adjourned till 2 pm on Tuesday after the Opposition created a ruckus over the Pegasus snooping controversy and other issues.

Opposition members sought to raise various issues and shouted slogans as soon as the House met for the day at 11 am. The proceedings lasted for barely five minutes.

The Monsoon Session of Parliament began with a stormy first session on Monday that saw Opposition leaders disrupting Prime Minister Narendra Modi from introducing his new Council of Ministers. On the second day, proceedings are likely to be overshadowed by the Pegasus snooping list issue which has riled the government of India ahead of the session.

On Tuesday, leaders of Opposition scheduled a strategy meeting at the Parliament House with a view to discussing the matter ahead of the session. Meanwhile, Congress MP Manickam Tagore has given Adjournment Motion notice regarding the Pegasus issue in Lok Sabha.

Trinamool Congress MPs had planned to stage demonstrations near the Gandhi statue in Parliament today at 10.30 am over the Pegasus Snoopgate matter. TMC has submitted Notices to discuss issues in both Houses.

Leader of Opposition in Rajya Sabha, Mallikarjun Kharge spoke to the media earlier and said they will be raising the Pegasus issue in the session today. He also added that nobody was obstructing the nation's development, adding that it was the BJP that was doing so. He also alleged that the party had earned a lot of money by imposing taxes, wasting money on projects and hiking the price of fuel.

Congress leader Rahul Gandhi, election strategist Prashant Kishor and Union IT Minister Ashwini Vaishnaw are among the top targets of Israeli spyware 'Pegasus', The Wire, in its second set of explosive revelations said.

On Sunday, The Wire as part of an investigation has revealed that at least 40 Indian journalists from across media houses were on a list of potential targets for surveillance, carried out through a systematic hacking of their devices using the controversial Israeli spyware Pegasus. In a detailed report, it also added that forensic tests confirmed that a number of the potential victims had indeed been spied upon by unidentified sources via the Pegasus app.

The allegation of deploying Israeli spyware Pegasus for 'snooping' took shape of a massive political row in Parliament and outside. Various opposition parties appealed for a meticulous investigation and sacking of Home Minister Amit Shah, while the central government still denying its involvement in the controversy.

The Congress condemned the Centre for "treason" and held Shah responsible for the entire ordeal involving snooping and hacking of phones of journalists, judges and politicians. They demanded a probe questioning the "role of the prime minister" in the entire matter as well.

The demand for a probe came from opposition parties, including the Congress, TMC, NCP, Left parties, RJD and Shiv Sena.

The BJP hit back at the Congress and claimed "there is not a shred of evidence" to link either the ruling party or the Modi dispensation with the matter.

IT Minister Vaishnaw on Monday also dismissed media reports on the use of Pegasus software to snoop on Indians. Defending the government in parliament, the newly appointed minister said there was "no substance" behind the sensational claims.“A highly sensational story was published by a web portal last night. Many over-the-top allegations were made around this story. The press reports appeared a day before the monsoon session of Parliament. This can’t be a coincidence…In the past, similar claims were made regarding the use of Pegasus on WhatsApp. Those reports had no factual basis and were denied by all parties. Press reports of 18 July 2021 also appear to be an attempt to malign Indian democracy and its well-established institutions.” he said.