Does Rajya Sabha MP P Chidambaram's comment on the government's stance towards the Missionaries of Charity, and other incidents indicate rising discrimination against Christians? 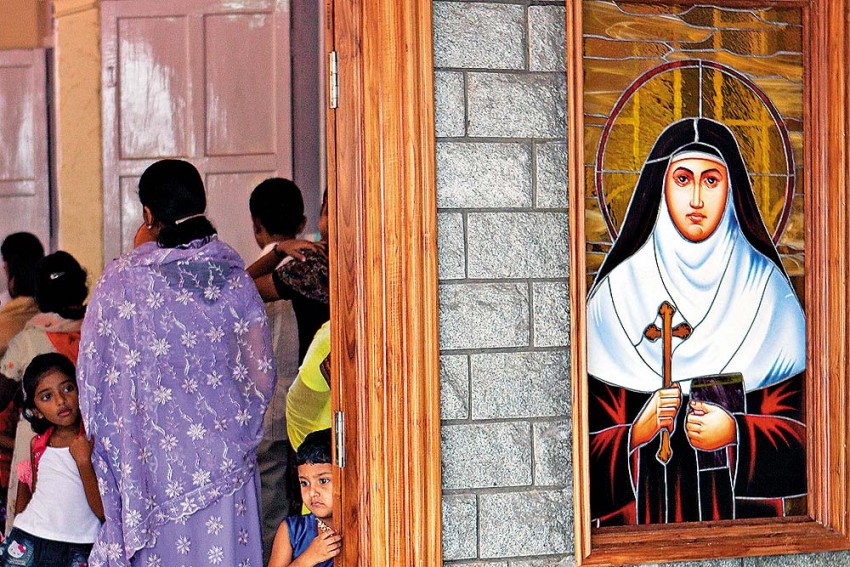 Mother Teresa’s Missionary of Charity (MoC) has been mired in controversy with the West Bengal government and the Centre lashing out at each other over the recent ‘freezing’ of Charity’s bank accounts.

He further added, “After Muslims, Christians are the new target of the Hindutva brigade.”

In the case of MoC, it reveals bias and prejudice against Christian charity work.

After Muslims, Christians are the new target of the Hindutva brigade.

The issue was flagged on social media with Chief Minister of West Bengal Mamata Banerjee 's tweet which announced that the Centre had frozen all the bank accounts leaving over 20,000 poor people without any food or treatment.

The Home Ministry soon, in a statement clarified that the central authorities did not freeze the accounts and reiterated that the Charity wrote to the State Bank of India asking for the accounts to be suspended.

Following the controversy over the renewal of Charity’s license, Father Dominic Gomes, the Vicar General of the Archdiocese of Calcutta hit out at the government agencies saying that the move is a “cruel Christmas gift to the poorest of the poor”.

Gomes stated, "In freezing the bank accounts of Missionaries of Charity... government agencies have given a cruel Christmas gift to the poorest of the poor... Missionaries of Charity Sisters and Brothers are often the only friends of lepers and social outcasts no one will even venture near... this latest attack on the Christian community and their social outreach is, even more, a dastardly attack on the poorest of India's poor. We condemn the government action.”

While it’s not clear what “adverse inputs” the government cited while refusing to renew MoC’s license, India is simultaneously seeing a growing intolerance and violence against the community.

On Christmas eve, members of right-wing groups set an effigy of Santa Claus on fire while shouting “Santa Claus murdabad”. The incident took place in the open, in the middle of the street in Agra.

One of the instigators of the incident said that Santa Claus does not bring any gift for children but his only motive is to convert Hindus to Christian.

In the same state, a group of right-wing men, carrying saffron flags, protested outside the Matridham Ashram. The incident was reported ahead of a Christmas event and while protesting they were heard shouting “Jai Shri Ram”. They also shouted -- ‘Dharmantran band karo’ (stop conversion), ‘Church murdabad’ (death to the church) .

Speaking to local media, Father Anand, a priest at the ashram said this is a clear indication of the threats the minority community is undergoing in current times. He added that the constant and rampant allegation of forced conversions of Hindus to Christianity is leading to a growing anti-Christian hysteria sweeping the country.

“Every Sunday is a day of terror and trauma for Christians, especially those belonging to those small churches,” he said.

On Christmas eve, a group of right-wing members from a Hindu vigilante group stormed into a school in Haryana’s Pataudi and shouted “Jai Shri Ram”.

The group reportedly claimed that the celebration of Christmas songs and dance along with the teachings of the Bible was being used for “religious conversion under the garb of celebrating Christmas”. They alleged that the missionary school was “brainwashing children through drama and speeches into accepting Christianity.”

The day after Christmas, a statue of Jesus was torn down in the same state while the Holy Redeemer Church in Ambala was vandalised.

In Kurukshetra, a group of people took over the stage at a Christmas celebration and began to play the Hanuman Chalisa on the loudspeakers. The video of the same went viral drawing backlash.

In recent times, the Bharatiya Janata Party (BJP) has taken up the issue of alleged forced conversions under Congress rule compounded by rallies and several demonstrations. Hitting back at the allegations, Chhattisgarh Chief Minister Bhupesh Baghel said that such things used to happen during the previous BJP regimes.

Bagel said, “BJP doesn't have issues like farmers' issues, cows or tribals anymore. They are left only with issues of religious conversion. I had said that the highest number of churches were constructed during the tenure of the BJP government.”

In December, the BJP-ruled Karnataka government passed the “anti-conversion” law. The law’s provisions against “unlawful conversions” has been used in other states to target Christian pastors. This year alone, Karnataka witnessed 39 Christian hate crimes, according to international media.

A report by the organisation Persecution Relief stated that crimes against Christians increased by 60 per cent from 2016 to 2019.

Another report titled, ‘Christians under attack in India’, released in October this year highlighted that over 300 crimes against Christianity have been reported from across 21 states, particularly North India, in nine months of this year.

The report was released by the Association of Protection Civil Rights, United Christian Forum and United against Hate at a press conference.