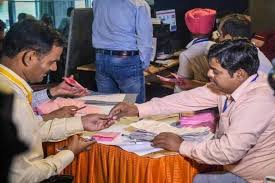 With the BJP winning nine out of the 28 Assembly seats in bypolls in Madhya Pradesh so far on Tuesday, the ruling party has already attained a simple majority in the 230-member House.

The BJP has a lead of 19 out of the 28 Assembly constituencies for which by-elections were held while the Congress is ahead in nine seats, according to the trends of counting on Tuesday.

Another minister, senior tribal leader Bisahulal Singh, won from Anuppur with a margin of 34,864 votes by defeating Congress's Vishwanath Singh.

BJP minister Hardeep Singh Dung won the byelection from Suwasara by 29,440 votes, according to PTI.

Ramchandra Dangi of Congress won the byelection from Biaora Assembly seat in MP by 12,102 votes.

BJP's Narayan Patel won the Assembly byelection from Mandhata in MP by 22,129 votes.

The Bahujan Samaj Party (BSP) is leading in Morena constituency.

Bhadoria is trailing by only 175 votes.

Elsewhere, BJP candidates are leading in 20 seats by margins ranging from 181 votes (Agar) to 22,456 votes (Sanchi), while Congress contestants are ahead in Sumaoli, Dimni, Ambah, Mehgaon, Gohad, Karera and Biora constituencies.

Tulsiram Silawat of the BJP is leading by a margin of 9,554 votes from Sanver against his Congress rival.

A total of 355 candidates, including 12 ministers, had contested the byelections held on November 3 for which a voter turnout of 70.27 per cent was recorded.