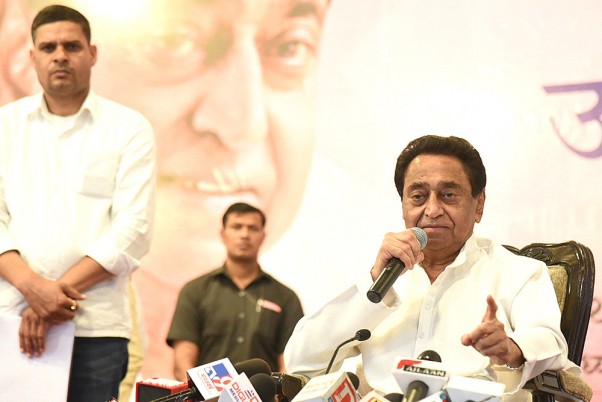 Madhya Pradesh Congress president Kamal Nath hit out at the BJP government in the state on Sunday and claimed that the ruling party was trying to muffle the voices of the country’s farmers.

Nath made the comments on Sunday while taking part in a farmers' tractor rally in Depalpur, about 50 km from Indore, to stage a protest against the Centre's new farm laws. Nath was spotted driving a tractor, in an agriculture-dominated area.

On Saturday, Congress workers protesting the three agri laws clashed with police and allegedly hurled stones while on their way to gherao the Raj Bhavan in Bhopal, prompting police to use water cannons, tear gas and canes to disperse them, officials earlier said.

Talking to reporters in Depalpur on Sunday, Nath said, "The administration in Bhopal tried to crush the voice of farmers. The (ruling) Bharatiya Janata Party does not understand that farmers comprise the largest community in our country."

The former state chief minister alleged that the central government was trying to privatise the country's farming sector through the three new agricultural laws.

"Lakhs of farmers have been agitating against the three black laws at Delhi borders since many days. These laws will destroy the economy of our state and the country as they will reduce the purchasing power of farmers, causing the markets to collapse," Nath said.

He also targeted the Shivraj Singh Chauhan-led state government over the death of 24 people after consuming spurious liquor in Morena district recently, crimes against women and unemployment.

"I appeal to the people to understand the truth and support the truth to secure their future," Nath said.

Before taking part in the tractor rally, Nath visited a temple in Depalpur.

Enacted in September last year, the three laws have been projected by the Centre as major reforms in the agriculture sector that will remove middlemen and allow farmers to sell their produce anywhere in the country.

Thousands of farmers, mostly from Punjab, Haryana and western Uttar Pradesh, have been camping at several border points of Delhi, demanding a repeal of the three farm laws.

Multiple rounds of talks between the government and farmer unions have failed to break the impasse so far, while the Supreme Court has appointed a panel for resolution of the issue.