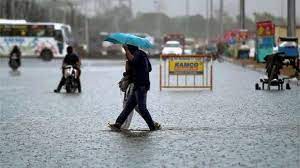 Chief Minister Shivraj Singh Chouhan said that the state is witnessing an unprecedented level of devastation since last 70 years.

The IMD on Thursday evening also issued a 'yellow alert' forecasting `heavy' rainfall in 17 other districts.

Rain-related incidents have claimed two lives in the state so far, officials said, adding that food packets were airdropped in the flood-ravaged areas of Gwalior and Chambal divisions.

A rain-related death each was reported from Shivpuri and Sheopur districts.

An air operation had been started to rescue people in the flood-hit Bhind district and Karera in Shivpuri district.

“The state has not seen such devastation in the last 70 years that the rain-ravaged Gwalior-Chambal region is facing. Bridges near the Ratangarh Mata Temple and Sankua in the area were damaged and many people got stranded in those areas,” a state official said, quoting chief minister Chouhan.

Chouhan also spoke to Prime Minister Narendra Modi in the morning. The prime minister assured all possible help to the state, officials said.

The CM also spoke with Union Home Minister Amit Shah who said the Centre will send an advance team to assess the damage, officials said.

Food packets were being dropped from aircraft in various inundated areas including 13 locations in Sheopur, officials said.

The chief minister also chaired a meeting in the morning at his official residence to review the flood situation.