The BJP MP from Bhopal described the man, who shot and circulated the clip, as 'Ravana' and said his old age and next birth will get spoiled. 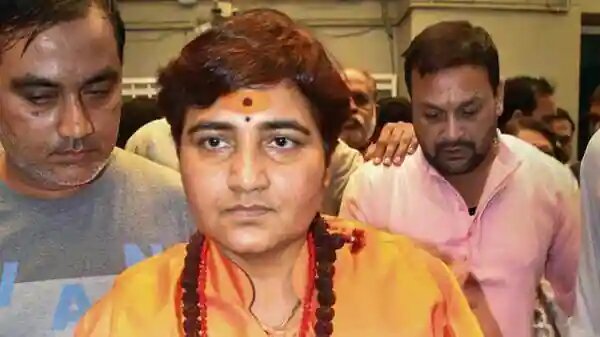 Bhopal's BJP MP Pragya Singh Thakur, who was confined to a wheelchair for a very long period of time and had obtained bail in the 2008 Malegaon blast case on medical grounds, termed the one who shot and circulated the clip as "Ravana" after a viral video showed her playing kabaddi emerged on social media.

She also jinxed that person's old age and next birth.

On Friday night, Thakur was speaking during a Dussehra programme in Bhopal's Sant Nagar (Bairagarh), a Sindhi community-dominated area.

"I went for offering aarti (at a Durga pandal) two days back, when some sportsmen playing on a ground requested me to conduct a (kabaddi) raid. A small clip of this was captured and shown in the media," she said.

"If someone fretted and fumed, it was Ravana among you, some Sindhi brother...someone who is a big enemy (of mine). I am not his enemy, but he considered me as his enemy. I don't know what precious thing I snatched from him...But Ravana can be anywhere," she added.

"I am telling the person, whose sanskaras have got spoiled, to mend them. If you don't, your old age and next birth will also get spoiled because whenever anyone has clashed with the patriots, revolutionaries and above all saints, neither Ravana or Kansa survived, nor will the 'adharmi' or 'vidharmi' of the present be saved," she said.

She said that her 'tapasya' (penance) and meditation was for public.

The video that went viral on social media showed Thakur playing a game of kabaddi on the premises of a Kali temple.

Earlier, another video of her taking part in a Garba dance during the just-concluded Navratri festival had emerged.

Defending the Bhopal MP, her elder sister Upma Thakur had earlier said that she suffers from a spine problem, which can give trouble to her any time.

"You never know at which moment it can create problems for her. There is a problem with her L4 and L5 bones (vertebrae) as they got dislocated because ATS Maharashtra (investigators) threw her on the floor.

"Whenever these problems occur, the lower portion (of her body) is left with no sensation....It can happen even when she sits or gets down from a vehicle," Upma had said.

On the other, MP Congress leaders, while taking a swipe at Pragya Thakur accused her of having many faces as sometimes she is seen in a wheelchair, sometime she plays Garba and kabaddi too.