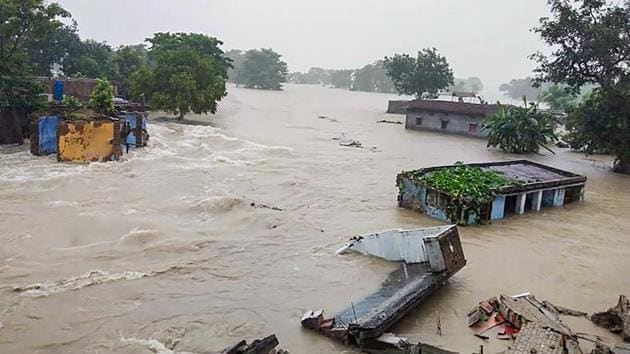 Unprecedented heavy downpour inundated 1,171 villages belonging to the Gwalior-Chambal region of Madhya Pradesh while three people were stranded on a tree for about 24 hours and five others were rescued from flood-hit Shivpuri district on Tuesday, said the officials.

According to the State Additional Chief Secretary (Home) Rajesh Rajora, the Army has been called in to conduct rescue operations in Shivpuri, Sheopur, Gwalior and Datia districts.

Prime Minister Narendra Modi assured of all help to the state after Chief Minister Shivraj Singh Chouhan informed him about the calamity.

Five people were rescued from the flood-hit Piproudha village in Shivpuri in the morning, officials said.

Besides, three persons were stranded atop a tree in Beechi village of Shivpuri for 24 hours, Rajora said.

"A team of the State Disaster Response Force (SDRF) rescued them with the help of a boat on Tuesday," Chouhan told reporters in Bhopal.

The CM said he will soon conduct an aerial survey of the flood affected areas of the state.
"A total of 1,171 villages were affected in the Gwalior-Chambal region due to excessive rainfall, especially Shivpuri and Sheopur, where an unprecedented 800 mm rainfall resulted in flooding," Chouhan said.

He said 1,600 people were so far rescued by teams of the National Disaster Response Force (NDRF) and SDRF, while 200 villages are still under the grip of floods, he said adding that boats were being used to rescue people from the affected areas.

"I am in touch with collectors and other officials of the flood-affected districts and people were sent on a high-places for safety where relief camps too were started,” he said.
On Monday, defence aircraft were pressed into service to evacuate people from some flood-affected villages in Shivpuri.

However, because of the heavy rains and bad weather in the district on Tuesday, the aircraft are unable to fly for the rescue operations, officials said.

The chief minister said that he is in constant touch with the administrations of rain-affected Shivpuri, Sheopur, Bhind and Datia districts and keeping a watch on the situation, they said.
The NDRF and SDRF teams were in action and the chief minister was also taking updates from them on the ongoing rescue operation, the officials said.

Shivpuri in-charge minister Mahendra Singh Sisodia, local MLA and state minister Yashodhara Raje Scindia were also camping in the district control room to supervise the rescue operation.
The chief minister chaired an emergency meeting at the secretariat in the state capital Bhopal to monitor the rescue operation and to review the flood situation in Gwalior and Chambal divisions, an official said.

As the flood situation in the Gwalior-Chambal region worsened, Chouhan informed about it in detail to Prime Minister Narendra Modi over phone, sources said.

"The prime minister has assured Chouhan of all necessary help to the state in dealing with the flood situation," a source said.

Chouhan also informed Modi about the ongoing rescue operations and discussed seeking help from the Army to deal with the situation, the sources said.

In Sheopur, nearly 60 people, who were stranded in a flooded building located near the Vijaypur bus stand following heavy rains, were rescued on Monday.

They had gone to Vijaypur to attend a marriage on Sunday night, but got stuck as flood waters entered the premises, officials said.