Union Minister Rajnath Singh blamed the opposition parties for inciting farmers against the farm bills decision. He also assured that the new bills are bills for economic and social empowerment of farmers. 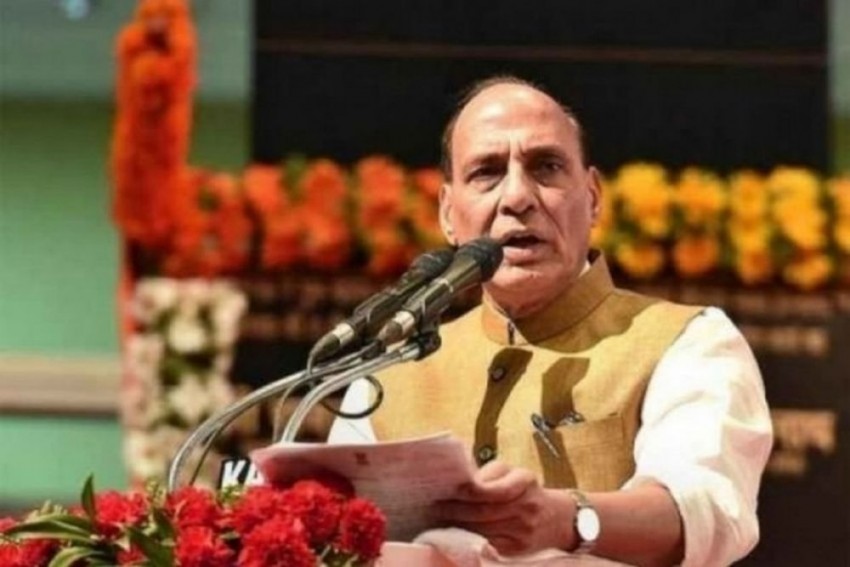 Seeking to allay concerns of farmers over a new set of legislations amid continuing protests by some parties, senior union minister Rajnath Singh on Thursday assured the farm community that the MSP (minimum support price) will not only stay, but it will also be continuously increased too in coming years.

He also assured that no one can claim ownership of farmers' land in lieu of contract farming and said there are enough measures in the legislations to safeguard the interests of farmers.

Opposition parties have alleged that farmers would be left at the mercy of corporates under the new laws, which have come into effect after the passage of three key bills in the recent monsoon session of Parliament.

Hitting out at Congress and other opposition parties, Singh said they are trying to create misunderstandings about the farm bills passed by Parliament.

He also attacked Congress for the burning of a tractor by protesters from their youth wing.

"A tractor was burnt. What is its logic? As weapons are sacred and respectable for soldiers, similarly tractors are to farmers. And I know this being a farmer, in any eventuality farmer will never burn his tractor. This was done by a political party for its political interest," he said.

The Congress' youth wing activists on Monday had set a tractor ablaze near India Gate in the national capital, a few hundred metres from the Rashtrapati Bhavan and Parliament, to protest the contentious farm laws.

Talking to a select group of journalists, the Defence Minister said, "Being a farmer's son myself, I want to make it clear that the Modi government will never do anything that is not in the interest of farmers. And these agriculture-related bills are for economic and social empowerment of farmers."

Singh also accused the Opposition of creating a misunderstanding among people about the minimum support price (MSP) mechanism and the mandi system and categorically said that both will stay.

"I want to assure farmers that the MSP will stay and rather it will be continuously increased in the coming years, in any case, it will not be abolished," he said adding that MSP in oilseeds and pulses increased by 23 times during the BJP-led NDA government.

On amendment in the APMC Act, Rajnath said the government is not ending the mandi system and rather it is giving more options to farmers to sell their produce including at more mandis.

He also said that at times farmers were charged taxes and did not get the right MSP in mandis, but the new law will provide them more options to sell their produce.

Talking about contract farming, Singh said enough provisions have been made in the new law to safeguard the interests of farmers.

Farmers will get the price of their produce as decided by them in the contract,  and sufficient provisions have been incorporated to ensure that the price does not go below the contracted rate, he said.

Singh further said if prices of their produce rise at a later stage, farmers will also get proportionately higher payments.

Accusing the Opposition of creating misapprehensions about the new law that it poses a threat to farmers' land, Singh said, "No power, in any case, can claim ownership of farmers' land using this bill. Enough measures have been made to safeguard the interests of farmers."

Underlining that all agriculture-related legislations are meant for the social and economic empowerment of farmers, Singh appealed to farmers and their organisation to come and talk to him to clear any misgivings.

"I appeal to all farmers' organisations that if they have any issue please come and talk with us. We are ready to listen to their suggestions for the welfare of farmers. I have already started talking to farmers organisations to clear misgivings and misconceptions," he said.

The government has been under attack from the Opposition for the passage of three farms bill in the recently held monsoon session of Parliament.

The government presented these bills as pro-farmers, saying these will ensure that farmers get better prices for their produce and do not get subjected to regulations of 'mandis'. It has also said that farmers will be now free to sell their produce to anyone and these legislations will increase competition and promote private investment, which will help in the development of farm infrastructure and generate employment.

However, opposition parties have slammed the bills as "anti-farmers", claiming that the agriculture sector will be left to the fate of corporate interests.

President Ram Nath Kovind has already given assent to the three farm bills -- The Farmers'' Produce Trade and Commerce (Promotion and Facilitation) Bill, 2020, The Farmers (Empowerment and Protection) Agreement of Price Assurance and Farm Services Bill, 2020 and The Essential Commodities (Amendment) Bill, 2020.