Mukhtar Abbas Naqvi will have the responsibility of winning the hearts of minorities and taking forward the 'development without appeasement' policy. 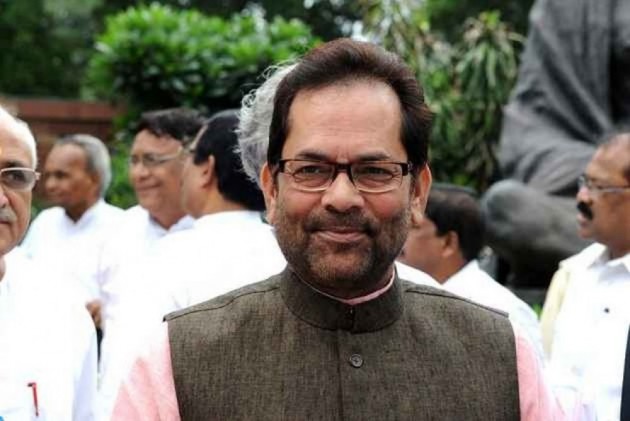 With Prime Minister Narendra Modi pledging 'sabka saath, sabka vikas and sabka vishwas' mantra, his cabinet's lone Muslim face Mukhtar Abbas Naqvi will have the responsibility of winning the hearts of minorities and taking forward the 'development without appeasement' policy.

Naqvi, who took oath as a cabinet minister on Thursday, was the Minority Affairs Minister in the previous dispensation and is credited with major reforms in the Haj policy.

During his tenure, the Haj subsidy was done away with under a new policy and women were allowed to go on the pilgrimage without Mehram or a male companion.

If he gets the Minority Affairs portfolio again, he would look to take forward the welfare policies and reforms while having the added responsibility of winning the hearts of minorities.

Prime Minister Modi, in a speech after securing a massive mandate in the Lok Sabha polls, had said: "Our mantra should be 'sabka saath, sabka vikas and sabka vishwas' (with all, for everybody's development and having everyone's trust)."

"They (minorities) cannot be handed over to them (Opposition), who benefit because we keep quiet," Modi had said.

Naqvi would look to act on taking minorities along with a slew of welfare measures.

As the Minority Affairs Minister, Naqvi effectively implemented various schemes aimed at socio-economic-educational empowerment of poor and weaker sections of minorities with the goal of "development with dignity".

Naqvi served as Minister of State for Information and Broadcasting and Parliamentary Affairs in 1998 in the Atal Bihari Vajpayee-government.

The other ministers from the minority communities included in the council of ministers are Harsimrat Kaur Badal and Hardeep Singh Puri.