Senior BJP leader Mukul Roy’s recent statement has kicked up a storm in the Darjeeling region in north Bengal. 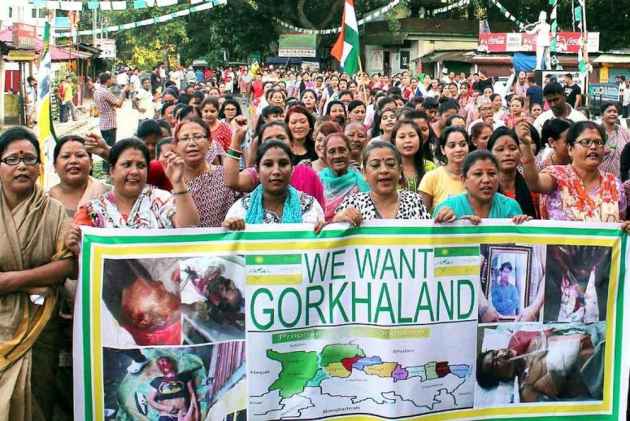 Senior Bengal BJP leader Mukul Roy’s remark that “the BJP was against the division of Bengal” has stirred the Gorkhaland bogey—which had taken a backseat during the Lok Sabha elections and saw a huge mandate for the BJP in the politically restive Darjeeling hills.

Roy’s statement has kicked up a storm in the Darjeeling region of north Bengal and comes at a time when 17 Darjeeling municipal councillors joined the BJP.

The 17 municipal councillors, who had shifted alliance from the Bimal Gurung faction of the Gorkha Janmukti Morcha (GJM) to the Binay Tamang faction, were believed to have been taken over to neighbouring Nepal, where they were placed “under house arrest” allegedly by the Gurung faction.

West Bengal intelligence officials believe that Gurung and a section of the faction’s top-rung leaders—who have been “underground” since the 105-day long shutdown in the hills in mid-2017—have been in hiding in eastern Nepal and keep travelling between Delhi and Dhahran in eastern Nepal.

Since the Gorkha strongmen went into hiding, the Tamang faction of the GJM took over the reins of the party and control of the Gorkhaland Territorial Administration (GTA) and subsequently aligned itself with the Trinamool Congress.

While the BJP and its allies talked about “Gorkha pride” and the need for development of the region, the Gorkhaland bogey was kept in abeyance.

The surfacing of the 17 former GJM councillors in Delhi prompted Bengal chief minister and Trinamool supremo Mamata Banerjee to question their presence in Nepal.

In 2014, the BJP had said it would “sympathetically look into” the long-pending aspirations of the Gorkhas.

In 2019 poll manifesto, the BJP said if it came back to power at the Centre, it would recognise the 11 Gorkha sun-tribes that were left out, as Scheduled Tribes and “was committed to finding a permanent political solution to outstanding issues, without saying anything on the demand for a separate state for the Gorkhas.

Meanwhile, Tamang on Monday condemned Roy’s remark and said since 2009, the people of the Darjeeling hills, Terai and the Dooars have voted for the BJP on the promise of a separate Gorkhaland. He said Roy’s statement has insulted people who want a separate state to be carved out of West Bengal.

The demand for a separate state was first made in the 1980s, with the Subhas Ghisingh-led Gorkha National Liberation Front (GNLF) launching a violent agitation in 1986, which went on for 43 days and led to the death of 1,200 people in the hills.

Ghisingh, however, was hounded away from the hills by the GJM headed by Bimal Gurung, who was emerging as an alternative leader in the hills to his mentor-turned-foe in 2008.

Gurung had then too revoked the Gorkhaland bogey and went on to spearhead two violent agitations in quick succession over the next decade and emerged as an “undisputed” Gorkha leader in Darjeeling hills.

Since then three generations of Indian Gorkhas and other communities living in the Darjeeling hills and neighbouring Terai and Dooars, have grown up on a staple diet of Gorkha pride and a demand for a separate state of Gorkhaland.

Hill political parties have over the years promised the people of Darjeeling, Kalimpong district and the contiguous Terai and Dooars region a separate state and implementing of the sixth schedule, which grants more autonomy to a region.

Gurung as the GJM supremo in 2007, signed a tripartite agreement with the Centre and Bengal government that led to the formation of the Gorkhaland Territorial Administration (GTA) replacing the GNLF-headed Darjeeling Gorkha Hill Council (DGHC).

But, despite BJP winning the Darjeeling Lok Sabha seat for a third consecutive term, the party has so far been tight-lipped on the formation of Gorkhaland.

“We want Gorkhaland” posters have surfaced in Darjeeling and Kurseong and in neighbouring Kalimpong too.

The posters put up by “Gorkhaland lovers” may stoke the emotive issue yet again, say political commentators.

And Gurung, some of them point out, who still wields immense influence in the hills and regularly releases audio and video messages on social media platforms, has kept quiet on the separate statehood issue since the BJP’s win in Darjeeling seat.

But knowing how deep the sentiment for Gorkhaland runs with the hill population, Gurung may too put his hat back into the ring albeit in absence.