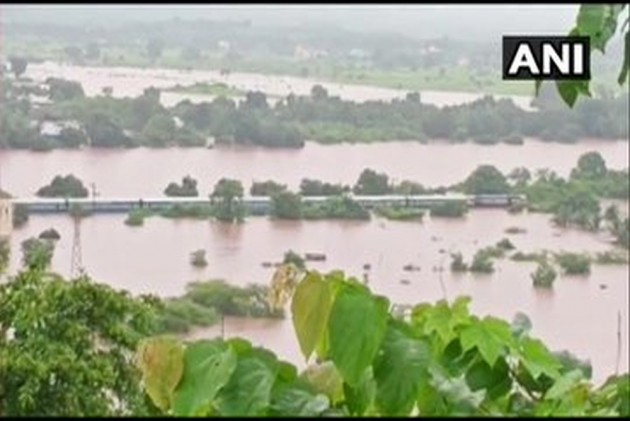 The ongoing rescue operation has successfully pulled out all passengers who were stranded aboard the Mahalaxmi Express after it got stuck due to heavy flooding in between Badlapur and Wangani, near Mumbai city officials said.

The Mumbai-Kolhapur train, which had over 1,000 passengers on board had been stuck for over 15 hours after torrential rainfall halted its movements.

"All the passengers have been evacuated from the train," Central Railway official said.

"A special train with 19 coaches will leave from Kalyan to Kolhapur with the passengers of Mahalaxmi Express," he added.

Speaking to a news agency, Director General, National Disaster Response Force (NDRF), SN Pradhan said, "Women & children were evacuated first including 9 pregnant women after that the elderly persons were evacuated and finally male passengers. The operation went on for around 8 hrs."

Maharashtra CM Devendra Fadnavis had instructed the Chief Secretary to personally monitor the rescue operations at Wangani where people were stranded in Mahalaxmi Express.

"4 teams of NDRF, 7 Navy teams, 2 helicopters of Indian Air Force, 2 Military columns have reached the spot. The situation is under control," Fadnavis was quoted as saying.

#MahalaxmiExpress rescue operation: Passengers being brought to Badlapur. 500 people have been rescued so far. #Maharashtra pic.twitter.com/cxU2jBnY9N

They said they had no drinking water or food since nearly 15 hours and no escape route as the train was practically cut off with five-six feet water on all sides.

#WATCH Maharashtra: Mahalaxmi Express held up between Badlapur and Wangani with around 2000 passengers. Railway Protection Force & City police have reached the site where the train is held up. NDRF team to reach the spot soon. pic.twitter.com/0fkTUm6ps9

Guardian Minister for Thane Eknath Gaikwad said two helicopters will help the rescue operation along with six teams of the NDRF on the ground from Mumbai, Thane and Pune which are rushing there with inflatable rubber boats shortly.

The towns of Badlapur, Ulhasnagar, Vangani were practically underwater since early Saturday as heavy rain lashed the region, flooding local rivers and other water bodies.

The Central Railway (CR) earlier in the day warned the Mahalaxmi Express passengers against stepping out of the trains in view of the dangerous water levels outside and requested them to wait for help which is on the way.

The CR added that a relief train has been stationed at Badlapur to ferry the passengers, along with food, water and medical supplies, besides making arrangements to take the passengers onward to Kolhapur.

Central Railway, Chief Public Relations Officer on #MahalaxmiExpress rescue operation: Evacuated passengers being lodged at safe places from where they will be moved to Badlapur. #Maharashtra pic.twitter.com/Henh9TkmAf

Though the suburban trains in Mumbai functioned with delays of 15-20 minutes on Western Railway and CR, the latter had to cancel services between Karjat-Kalyan (in Thane) owing to floods and waterlogging on the tracks since Friday.