Mumbai Woman Who Was Raped, Assaulted With Iron Rod, Dies In Hospital 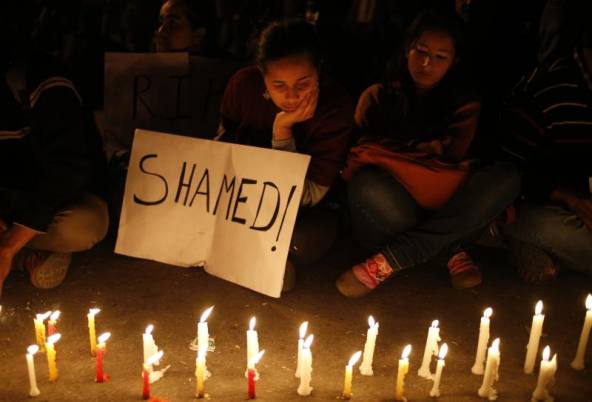 A 34-year-old woman, who was raped and brutally assaulted with an iron rod by a man inside a stationary tempo in Mumbai, died at a hospital during treatment in the early hours of Saturday, police said.

Maharashtra Chief Minister Uddhav Thackeray termed the incident as a "blot on humanity", and ordered that charge sheet in the case must be filed within a month. Holding a meeting of top police officials, he also directed that measures should be taken to make the city safer for women.

"The trial in the case will be held on a fast track and the victim, who succumbed to injuries today, will get justice," Thackeray said in a statement.

The Sakinaka area in the western suburbs has several industrial units. According to police, accused Mohan Chouhan (45) worked as a driver and lived on the pavement in the same area.

Besides being raped, the victim woman was assaulted with an iron rod in her private parts and lost a lot of blood, a police official said. She was also stabbed with a knife, he added.

Mumbai police commissioner Hemant Nagrale told reporters that the crime came to light when the watchman of a company located on Khairani Road in Sakinaka called the police control room and said that a man was seen thrashing a woman.

Police reached the spot within 10 minutes and found the victim inside a parked tempo. As her condition was serious, they decided to take her to hospital in the same vehicle so as to save time. They got the key of the tempo from the watchman and drove her to Rajawadi hospital in suburban Ghatkopar, the commissioner said.

The police also obtained CCTV footage of the spot. A man who was seen leaving the tempo in the footage was identified as Mohan Chouhan who hails from Jaunpur, Uttar Pradesh, the commissioner said.

He was arrested and produced before a court which sent him in police custody till September 21, Nagrale said.

His blood-stained clothes were also seized. They would be sent for forensic analysis to find out if it is the victim's blood, the commissioner added.

A Special Investigation Team has been formed to conduct the probe, he said.

"Assistant Commissioner of Police Jyotsna Rasam will be the investigation officer. The probe will be completed within a month, and the case will be tried before a fast-track court as the chief minister announced," the commissioner said.

"As the victim was unconscious, her statement could not be recorded. Therefore police are as yet clueless about what exactly happened. But it will be ascertained during the investigation," Nagrale said.

The probe so far has revealed the involvement of only one person in the crime, the commissioner said.

On Friday the police had booked the accused under IPC sections 307 (attempt to murder), 376 (rape), 323 (assault) and 34 (common intention). After the victim died, section 302 (murder) was added, while section 34 was dropped as the involvement of any other person in the crime has not come to light, a police release said.

Leader of Opposition in the state Legislative Assembly Devendra Fadnavis demanded that Chief Minister meet the Chief Justice of the Bombay High Court and request him to hold the trial of the case in a fast-track court.

"I know that awarding a sentence is in the hands of the judiciary. But I feel the culprit in the Sakinaka rape should be hanged to death," the BJP leader said. Another BJP leader Pravin Darekar said the "onus" of the incident was entirely on the Shiv Sena-led state government "because there is no respect left for the law".

State BJP vice-president Chitra Wagh pointed out that the Maharashtra women's commission does not have a chairperson for over a year.

Later in the day, chief minister Thackeray held a meeting of top police officials and directed that charge sheet in the case must be filed within a month. A special public prosecutor should be appointed immediately and the judicial process must start from Sunday, an official release quoted him as saying.

"Mumbai is a safe city and its image shouldn't be maligned. The city police must take steps to ensure women's safety," the chief minister added.

He appreciated the fact that the police reached the crime spot within ten minutes of getting information and shifted the victim to hospital, besides arresting the suspect quickly.

"Mumbai is known to be a safe city and people trust the police and law and order. But when such incidents take place, we have to be more cautious, " he said.

The chief minister also directed that regular patrolling must be undertaken in places frequented by women or where women can find themselves in vulnerable situation.

Police should take the help of NGOs to shift homeless women living on the streets to safer places. The second phase of installation of CCTV cameras in the city should also be taken up, he said.