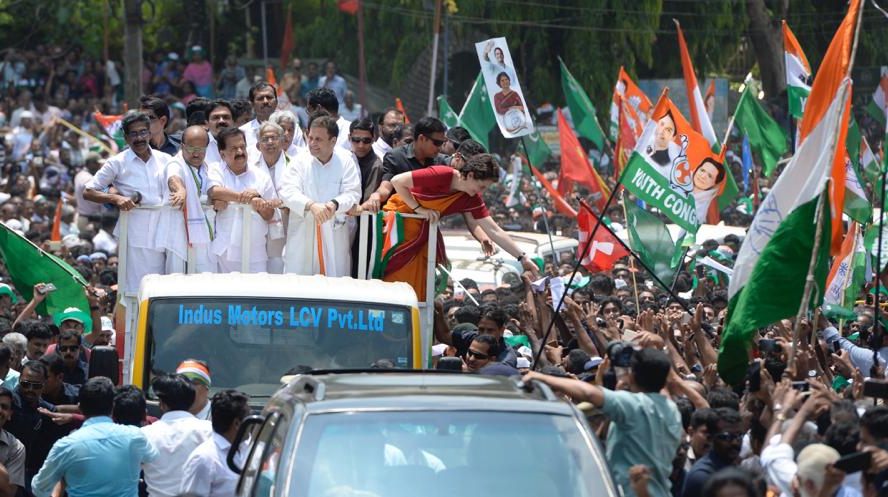 Social media and a section of media were abuzz with rumours that IUML may avoid using the party flag, as conveyed secretly by state Congress leaders in the fear of a backlash of its alliance with a ‘communal party’ in the state. Many also said that the party’s association with IUML will put Congress in dock and Rahul Gandhi will have to face uncomfortable questioning from the Bhartiya Janata Party (BJP).

A controversy broke out last week after the announcement of Rahul’s candidature in Wayanad, when many social media users posted pictures of Rahul supporters celebrating his decision by waving green flags. It was alleged that the flags used in the picture were Pakistan’s national flag. However, a section of social media users later pointed out that the flags in the photograph belonged to IUML and not Pakistan’s.

Rahul Gandhi To File Nomination From Wayanad Today, Arrives In Kerala With Priyanka

Refuting charges of Congress asking IUML to avoid carrying its flag, I C Balakrishnan, DCC President, Wayanad, said that the reports are a figment of imagination.

“It’s a baseless allegation. UDF has many allies and IUML is one of our oldest allies. I have been associating with the party for so many years. Why would we give secret orders to them? We never had any differences with our ally and we work shoulder to shoulder,” he said.

Describing the reports as baseless, K P A Majeed, Muslim League state general secretary, said that the party used the flags to welcome Rahul Gandhi today and there was no communication from the Congress leaders to avoid using the flags.

Speaking to Outlook, Majeed said that there is an effort to create division in the society from a section of people. “We were allies for a long time. We were part of the UPA government also. These are completely baseless allegations. No meetings between the leaders were held in this regard,” he said. It’s shameful that some people cannot differentiate between an IUML flag and a Pakistan flag, he added.

Wayanad, which constitute seven Assembly constituencies, was carved out after the 2008 Delimitation process and it’s perceived as a safe seat for Congress President. The seat has been vacant since November 2018 after the death of MI Shanavas, a two- time MP from Wayanad.

Describing Muslim League as a crucial player in Wayanad, he said that the party was instrumental in Congress ‘victory in the 2014 Lok Sabha elections. “Muslim League is the deciding factor in the constituency. In 2014, the Congress candidate won because of the votes garnered from three districts, where IUML has an upper hand,” he said.

Rahul Gandhi’s decision to contest in Wayanad was interpreted by BJP as a move to woo the Muslim community and Prime Minister Modi even said that “Rahul is running away from Hindus”. Responding to the allegations, Majeed said that BJP is playing divisive politics and Wayanad never voted in the lines of caste and community. “Their argument is that Rahul came to Wayanad out of fear of Hindus. The truth is that here Hindus constitutes majority. It’s BJP’s ploy to polarize and in caste has never been a consideration in Wayanad,” he said.