The Army said that the modalities for disengagement from all friction areas in Eastern Ladakh were discussed and will be taken forward by both sides. 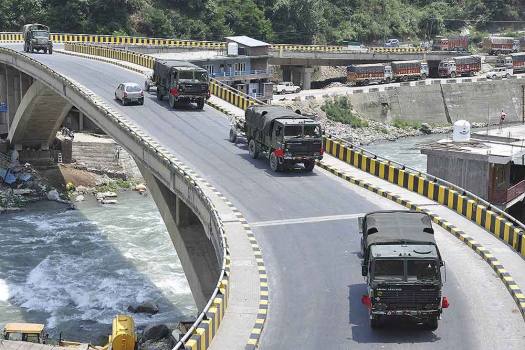 The Indian Army termed the Corps Commander level talks with China “cordial, positive and constructive,” and said the two armies reached a mutual consensus to disengage.

The Army said that the modalities for disengagement from all friction areas in Eastern Ladakh were discussed and will be taken forward by both sides.

The top-level military were held on Monday at Moldo on the Chinese side of the Chushul sector in eastern Ladakh and lasted for close to 11 hours.

India had earlier strongly raised with China the "pre-mediated" attack on Indian soldiers in Galwan Valley and demanded immediate withdrawal of Chinese troops from all friction points in eastern Ladakh, during the second round of Lt General-level talks, people familiar with the development said.

As India's border tension with China escalated, top commanders of the Army carried out a comprehensive review of the entire situation in eastern Ladakh and resolved to deal with any Chinese misadventure with a "firm hand", they said.

The first round of the Lt Gen talks was held on June 6 at the same venue during which both sides finalised an agreement to disengage gradually from all standoff points beginning with Galwan Valley.

However, the situation along the border deteriorated following the violent clashes in Galwan Valley on June 15 that left 20 Indian Army personnel dead.

Both sides significantly bolstered their deployments in most areas along the 3,500-km de-facto border after the clashes.

Though China has not revealed its casualty figure, there were reports that a commanding officer of the Chinese army was among those killed in the clashes. There is no official confirmation about it.

In the talks, India pressed for restoration of status quo ante in all areas of eastern Ladakh including in Pangong Tso.

Separately, the top army commanders at a conference in Delhi on Monday held a detailed deliberation on the eastern Ladakh standoff and on the overall situation along the Line of Actual Control, official sources said.

On the first day of the two day conference, Army Chief Gen M M Naravane carried out a comprehensive review of India's security preparedness along the LAC with China in Ladakh, Arunachal Pradesh, Uttarakhand and Himachal Pradesh, they said.

They said Gen Naravane is visiting Leh on Tuesday afternoon to take stock of the operation preparedness of the Army in the region.

Also Read | How Do We Read Galwan Valley Killings By The Chinese?

The government has given "full freedom" to the armed forces, deployed along the 3,500-km de-facto border with China, to give a "befitting" response to any Chinese misadventure, government sources said after Defence Minister Rajnath Singh reviewed the situation in eastern Ladakh at a meeting with the top military brass on Sunday.

The Army has already sent thousands of additional troops to forward locations along the border in the last one week. The IAF has also moved a sizable number of its frontline Sukhoi 30 MKI, Jaguar, Mirage 2000 aircraft and Apache attack helicopters to several key air bases including Leh and Srinagar following the clashes.

The Indian delegation at the talks in Moldo was led by 14 Corps Commander Lt Gen Harinder Singh while the Chinese was headed by the Commander of the Tibet Military District.

The people cited above said India raised the issue of Galwan Valley clashes in the Lt General-level talks.

In a telephonic conversation with his Chinese counterpart Wang Yi on Wednesday, External Affairs Minister S Jaishankar called the clashes a "premeditated" action by Chinese PLA and held it directly responsible for the incident.

The Chinese soldiers used stones, nail-studded sticks, iron rods and clubs in carrying out brutal attacks on Indian soldiers after they protested the erection of a surveillance post by China on the Indian side of the Line of Actual Control in Galwan.

After the clashes, the two sides held at least three-rounds of Major-General level talks to explore ways to ease the situation between the two sides.

The two armies were engaged in a standoff in Galwan and several other areas of eastern Ladakh since May 5 when their troops clashed on the banks of the Pangong Tso.

The situation in eastern Ladakh deteriorated after around 250 Chinese and Indian soldiers were engaged in a violent face-off on May 5 and 6. The incident in Pangong Tso was followed by a similar incident in north Sikkim on May 9.